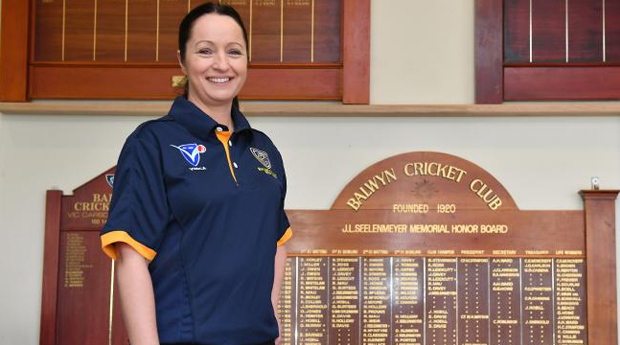 Nicole Jackson-Kiker has made history by becoming the first female president of a Sub-District Cricket Association.

Jackson-Kiker was elected Balwyn’s new president late last month, replacing Clinton Kennon to become the first female president of a Subbies club in the 109-year history of the association.

In a competition dominated by men, Jackson-Kiker is tearing down barriers.

While she’s hasn’t been on the Balwyn committee previously, Jackson-Kiker has been a familiar face down at Gordon Barnard Reserve watching her husband Geoff in the Tigers’ Second XI.

“I’m a Big Bash fan (and) I’ve been supporting Geoff playing cricket for a number of years,” Jackson-Kiker said.

“Am I passionate about cricket? Not necessarily but, for me, it is a good opportunity, I guess I am looking at it like work.

“It is a business, it is dealing with a committee, it is making sure we are all doing our jobs and we are all fully committed to the cause and club.”

While you may not catch her at the coming Ashes series­, Jackson-Kiker brings savvy business acumen to the role as a marketing manager­.

“I see the importance of the club, they’re a great club, very strong and very family-friendly,” she said.

“One thing I am passionate about is the community and if I can add any value to their future, then I’m really pleased to do so.”

Jackson-Kiker said she would be a more “behind the scenes” president.

“I had a few comments about the fact it might be a really­ nice change to have a non-playing president,” she said.

“I guess it is important we are looking ahead with a bit of a long-term vision, it is not just about looking at the opportunities for this season or next season but to have a look at how Balwyn Cricket Club will be viable in 10 years time.

“Am I passionate about the game? I wouldn’t say I was, but from a president’s point-of-view, I don’t really think that matters.”

This article originally appeared in the Progress Leader, by Toby Prime here.