Ready to step out of the shadows 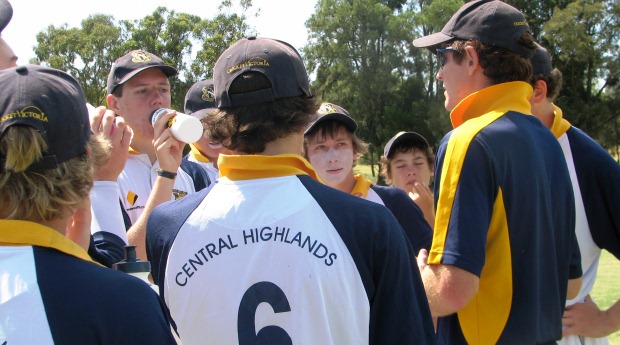 The Central Highlanders have fallen just short of an elusive state championship in recent years.

The Central Highlanders have fallen just short of an elusive state championship in recent years, but with a raft of current and former state under-age representatives filling their sides this summer, 2012-13 could well be the season that it all comes together as Lachlan McKenna reports.

Having taken over from former Commonwealth Bank Bushranger Ben Oliver as the Regional Cricket Manager for the Central Highlands, Campbell Waring’s tenure has now entered its seventh season.

Since that time the region has produced 15 male underage Victorian representatives, as well as Bushrangers all-rounder Daniel Salpietro, along with a further 11 female representatives.

The hunger for team success, however, drives the Highlanders most with Waring excited about the current group and its potential to perform in this year’s Victorian Bushrangers and VicSpirit Pathway Championships.

“We (the coaches and I) are really happy with the talent in this season’s squads,” Waring said.

“The guys have had a really positive pre-season, while in the girls we are blessed with the highest participation we have ever had.

“I have high hopes for all the teams, I think they should do really well.”

There seems to be a distinct culture at the Highlands, where their ability to bond as a team allows them to fight outside their weight division, with sometimes less talented sides.

For Waring, creating that bond is a key component of the pre-season, which he hopes will benefit all six Highlands teams come the Pathway Championships.

“The best teams we have had have all had that distinct ability to bond, which I think allowed us to play better than our talent suggested,” he said.

“You need a lot of luck in these Championships. Sometimes it just takes a favourable decision or winning the toss to give you that edge you need.”

The under -18 team, which two seasons ago were defeated by the Gippsland Pride in the state final, will again be competitive in the 2012-13 edition.

The line-up, which also includes Northcote wicket-keeper Blayde Baker, aims to again be in contention after last season was spent developing a crop of underage players.

“We have a good mix of guys with lots of experience at this level,” Baker said.

“The aim is to be around the quarter-finals day; from there we can give ourselves every chance.

“We have a great top-six batting line-up, and for me that’s going to be our real strength.

“Obviously James Lidgett and Matt Short are going to play a big role for us, while Jarred Vernon could be the ‘x-factor’ we need to go one better this time around.”

The final Dowling Shield squad, which was announced recently, boasts a total of seven under-age players; four of which competed in the state final two years ago when they were defeated by the Inner-East Emus.

Despite their age, the under-16 Highlanders look to be one of the favourites again, with strong batting and bowling departments headlining their side.

Victorian under-17 representative Jack Baker, who captained the side two seasons ago, was absolute in expressing is desire to go one better this time around.

“It would be nice with a great bunch of guys to play in that final and hopefully bring home a championship,” Jack Baker said.

“We aren’t thinking too far ahead though, it is a tough competition, with lots of great players.

“With our depth in our batting and bowling, we should put ourselves in a good position to win enough games to make the finals. From there, anything can happen”.

The development of the under-14 program has reaped significant reward in recent seasons.

A major emphasis on skills and training has seen the Highlands’ youngest male side reach two semi-finals and a final in the previous three seasons.

This up-coming side promises to be no different, with former Victorian under-12 representatives Jack Lalor and Jack Cubley leading the squad in 2012-13.

While the male programs in the Central Highlands look strong again, the female VicSpirit Pathway development remains a real passion for Waring, who is always exploring new ways to recruit girls into the program.

“We are lucky enough this year to have 28 girls in the under-14 program, which is really encouraging,” Waring said.

“We recruited from junior cricket, while many come from MILO in2cricket and Super 8’s carnivals.

“Just last week we found a couple of girls at a carnival that we would like to see in Central Highlands programs in the future.”

Ultimately for Waring, it appears that winning comes second in a region that has fostered a great environment for young players to develop.

For the players themselves, however, it would seem that hoisting the trophy aloft is at the forefront of all of their minds.