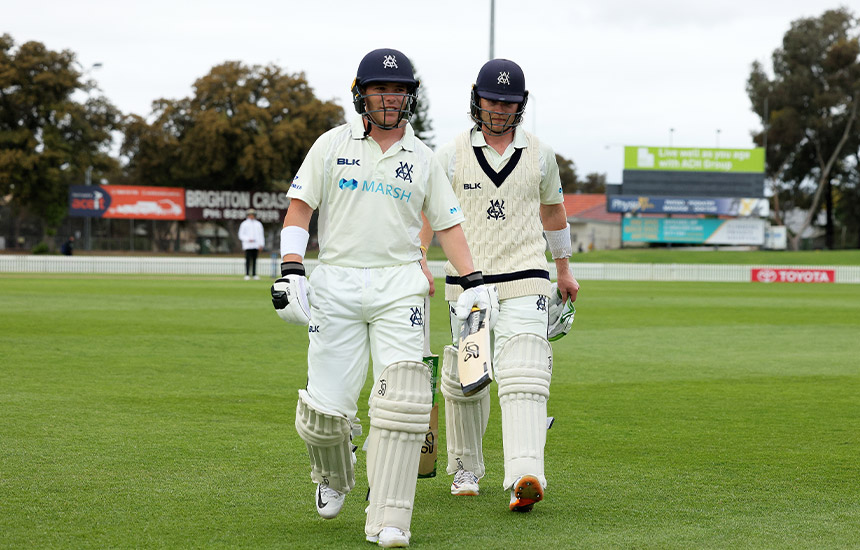 After the bowlers did the job on day one against South Australia, Will Pucovski and Marcus Harris strode to the crease with the intention to get through the night unscathed.

But what happened next will be etched into Sheffield Shield folklore.

Resuming day two at 0/38 in reply to South Australia’s 200, Harris and Pucovski returned to the middle to complete a mesmeric record-breaking display.

Only hours later, Harris reached his triple-figure milestone first – his 14th Sheffield Shield century – but Pucovski wasn’t far behind, raising the bat for his fifth Shield ton in just 21 matches only minutes later.

As the pair surpassed the Redbacks at the mid-way point of day two, the records started to tumble.

With both players passing 150 respectively, every run scored from then on seemed to be a new record smashed in the clinical partnership.

When reaching 0/376, the 94 year record of Victoria’s largest opening stand between Bill Ponsford and Bill Woodful – that day the Vics posted 1107.

In the final minutes of day two, the record of Victoria’s largest partnership of 390 was shattered as Harris moved to 195 and Pucovski 187.

At the close of play Harris departed on 207 not out and Pucovski one short of his second double-century in his short – yet brilliant – tenure for Victoria, unbeaten on 199.

The pair had amassed 0/418; becoming the fifth partnership in Sheffield Shield history to add in excess of 400.

With the very first ball of Day 3, Pucovski joined Harris as a double centurion, before the pair quickly surpassed 0/431, the previous Shield record for the highest opening stand.

But it was later in the first session where the magical figure was reached.

When the score passed 0/464, Harris and Pucovski surpassed Steve and Mark Waugh for the highest Sheffield Shield partnership of all-time.

As the pair upped the ante of the innings, Harris fell caught behind for a remarkable 239 from 399 balls. And after 123.3 overs, Victoria lost its first wicket of the innings with the score at 1/486.

Pucovski continued on to finish unbeaten on 255 from 386 deliveries when the declaration came, an innings that included 27 fours and a six.

As the pair were inseparable for the best part of two days of cricket, it was only fitting that Harris also finished his innings with 27 boundaries and one maximum.

Despite spending the entirety of day two in his pads waiting the first wicket to fall, Victorian skipper Peter Handscomb couldn’t have been happier with his opening pairs partnership.

“That was awesome, so great to watch,” he said at the close of play on day two,” Handscomb said.

“We sort of joked at the start (of the day) that the perfect day today would be to be none down at the end of the day.

“For Harry and Puc to come out and do that – as far as we understand they have the highest partnership for Victoria of all-time so it was a pretty special day.”

After a huge season last year, reigning Bill Lawry Medal winner Nic Maddinson exchanged positions with Pucovski in the batting order and it worked to great effect. Handscomb believes the decision – after thorough discussion – came down to team balance and the way the deck loomed to play before the match.

“Once you start playing practice games, you start to look at team balance and how you want to go moving forward,” he said.

“We felt out here on this wicket we might need an extra bowler and the right thing to do was move everyone up and when we asked Puc if he would be keen to do it, he jumped at the opportunity.

Handscomb further praised the mental toughness of both Harris and Pucovski, who remained alert for such a long period of time in the middle.

“As a batter, it is easy to switch off and make a mistake for one ball, and that’s all it takes,” he said.

“To go through an entire day batting together; they’ve been in the middle, talking together, talking the same rubbish they’ve spoken to each other for the entire day, and for neither of them to throw it away with a poor shot or a bad decision is credit to them both.

Victoria take on Western Australia in its second match of the Sheffield Shield season beginning on Sunday November 8.