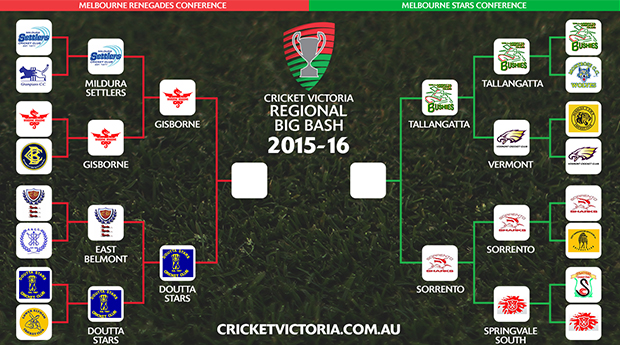 The Cricket Victoria Regional Big Bash has reached the Conference Finals stage of the competition.

Each of the 16 Cricket Victoria regions had representation in the Victoria wide T20 knockout competition.

Gisborne CC were well travelled prior to the Christmas break with trips to Bendigo for the quarter final where they completed a strong nine-wicket win over Bendigo CC.

The Dragons’ then travelled to Horsham for a Semi Final clash with Mildura Settlers where they were victors by five wickets.

Doutta Stars CC defeated Lower Eltham by 12 runs in the Quarter Final and accounted for East Belmont CC by 26 runs to qualify through to the Melbourne Renegades Conference Final.

Tallangatta CC played host to Montrose CC in the Quarter Final and produced a comfortable 36-run victory to begin their campaign. In the Semi Final, batting first, Tallangatta CC posted an impressive 180 from their 20 overs and managed to hold on for a 16-run victory.

Sorrento CC had a tremendous start the Cricket Victoria Regional Big Bash dismissing East Sandringham Boys Club CC for just 54 in the Quarter Final which led to a nine-wicket victory. In the Semi Final, Sorrento CC travelled to Springvale South CC and won a hard fought match by 20 runs to progress through to the Melbourne Stars Conference Final.

To view full scorecards and results of the competition click here