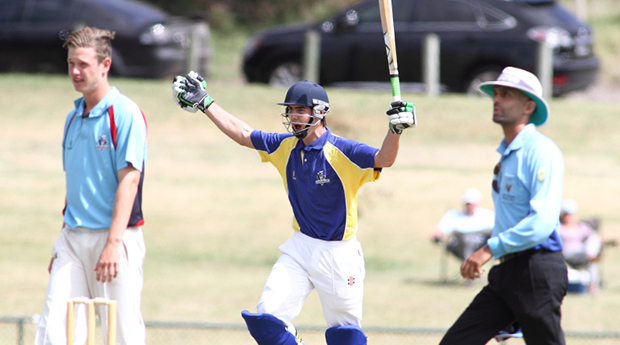 The Northern Rivers are the under-18 male state champions after an incredible innings from Brayden Stepien set the platform for his side's run chase against the South East Bayside Breakers.

Stepien unfortunately chipped the ball to cover and was caught while looking for his hundredth run after facing just 68 balls.

His innings of 99 included nine fours and six sixes as he put on a batting display, consistently clearing the boundary with superbly struck, genuine cricket shots.

Earlier, the Breakers won the toss and elected to bat in slightly overcast conditions.

The openers started well until Wesley Agar was trapped LBW to Nathan Fitzpatrick for 16.

Will Pucovski came to the crease to join Nick Suppree, while bowlers Fitzpatrick and Layton McCann tightened the screws.

The excellent bowling partnership stemmed the flow of runs and built pressure, before McCann picked up the wicket of Supree (19) – caught well by Brayden McGregor at first slip.

The pair put on 76 for the fourth wicket before Diggle’s dismissal for 32 triggered a middle-order collapse.

Three quick wickets saw the score go from 3-142 to 6-144 in short time, including two wickets in three balls from Kyle Winter-Irving.

Josh O’Donnell came in and kept the score ticking over in the dying overs before being run out for 15.

George Fry (8*) entered and added some valuable runs in the last over – including a huge six that crashed into the AH Butler Oval scoreboard on the final delivery of the innings.

Pucovski finished with an unbeaten 63 off 101 balls and simply didn’t look like going out during his entire innings, leading his side to 7-179 off its 50 overs.

Winter-Irving took 2-31 from his 10, Fitzpatrick also had 2-31, and McCann was brilliant in slowing the run rate down during the middle overs, finishing with 1-8 off eight overs.

In response, McCann played a mature and professional supporting role to the big-hitting Stepien, as the pair got off to a brilliant start with the bat.

As mentioned, Stepien’s stellar striking of the ball put the Breakers out of the game and it seemed like the Rivers would take the win with relative ease.

The Breakers always knew that if they could dismiss the Rivers’ star with enough breathing space then they were always a chance.

After an opening partnership of 121, Stepien’s dismissal sparked a sudden change in proceedings.

Luke Shimmin entered the attack and was the one to snare the big wicket of Stepien, and followed it up by bowling the dangerous Rhiley Lau for a first ball duck.

This gave the Breakers a huge boost in confidence, as they suddenly became extremely vocal in the field.

Wes Agar was putting in a huge effort and bowling fast, and he was rewarded with the wicket of Kyle Mueller (1).

Suddenly the Rivers were 3-125 as Winter-Irving arrived at the crease to a barrage of vocal ‘encouragement’ from the Breakers’ players.

The rock of the innings, McCann (22), was the next to exit after another miscued drive off the bowling of Shimmin.
The Rivers were still on top, but the momentum was certainly with the Breakers.

Fitzpatrick (one off 17) joined Winter-Irving at the crease and took over the supporting role, as the pair fought through some tight bowling to ultimately shut the Breakers out of the match.

Overs were never an issue for the Rivers due to the team’s quick start, so they simply had to survive and the runs would take care of themselves.

Led by Winter-Irving, the batsmen slowly chipped away at the score in what was a complete contrast to the first half of the innings.

With just 10 to win however, Winter-Irving had had enough, smashing Will Taylor for two consecutive fours before belting a straight six to win the match and the championship.

Significant credit must go to Winter-Irving, who played a mature innings amidst the pressure of the situation, as well as the Breakers’ taunting, to finish unbeaten on 44.

The Rivers took the victory with 14 overs remaining and five wickets in hand.

Shimmin was the pick of the bowlers finishing with 3-16, while Agar (1-40) bowled with good pace and Oliver Gunning (1-15) kept the pressure on down the stretch.

Semi-final hero George Fry bowled just two overs (0-15) after being belted out of the attack by Stepien early in the innings.

Stepien (named Man-of-the-Match) finished the championships with 301 runs at an average of 60.2.

His teammate Rhiley Lau (214 runs at 53.5) was awarded the joint Player-of-the-Tournament despite being dismissed first ball in the Final.

Louis Gillies of the South East Sharks was the other recipient of the award alongside Lau.

Congratulations to the Northern Rivers on becoming the under-18 male state champions after a brilliant tournament from start to finish.