Stars on the rise 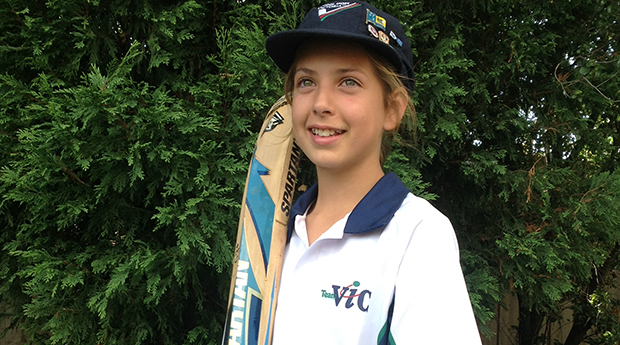 The future of Victorian cricket is in good hands with the emergence of two exciting all-rounders.

Tess Flintoff and Merinda Hale, while only 12 years old, have already begun their ascent up the ranks of the representative cricket ladder.

Earlier this year, the pair competed in the Under-14 VicSpirit State Championships with Hale representing the South East Sharks and Flintoff the Outer East Eagles.

Flintoff, or ‘Freddy’ as she is known by her friends, says she hopes to emulate her namesake in becoming a genuine all-rounder.

She also wishes to one day break a cricket record.

“I would like to be the best female batter and to bowl the quickest ball ever recorded by a female,” Flintoff said.

Hale, who also played in the Imparja Cup tournament last year, listed the tournament as a highlight of her cricket career.

“The Imparja Cup tournament is a great time and the cricket is very strong,” Hale said.

“I have played for two years in the competition.

“In my first year I was only 11 years old playing in open age so was a bit scary but I really enjoyed it.

“We get to do community visits and teach school kids how to play cricket.

“We get to experience the culture of the local people.

“I also got to play alongside my mum, which I absolutely loved.”

It was a mix of strong performances and commitment to improve which prompted The Australian Cricket Society (ACS) to award the pair ACS scholarships to the Bryce McGain Elite Cricket Academy (BMECA).

Sara Sprague, a committee member of the ACS described the scholarships, worth $5000, as a continuation of an initiative that aims to give greater opportunity to young cricketers.

“For the past two years the society has offered scholarships to talented and deserving up and coming cricketers with a passion and commitment to the game that may not have access to extra development opportunities,” Sprague said.

“This year the society wished to invest in the development of women’s cricket by offering scholarships for two dedicated young female players.

“Both these girls had proven commitment to playing cricket at various levels and high praise from those that have been working with them.

“The families of both Merinda and Tess are very involved in supporting their individual development and that was really important to us.

“A strong passion for cricket, good character, ability, potential, commitment and support were some of the criteria we looked for in choosing our scholarship winners.

“The ACS scholarship covers the cost of the three year program at the BMECA.

“With the help of experienced coaches, the girls will not only learn how to improve their game but will also learn about leadership, physical conditioning, nutrition and be educated on the mental side of the game.”

Hale and Flintoff said they were delighted by the announcement and looked forward to honing their skills in the coming years.

“I am very excited about the scholarship and to be given the opportunity to be coached by elite coaches,” Hale said.

“It will help me become a better cricketer so that I hopefully play cricket at the highest level, Australia.”

“I can’t wait to begin training, it’s a great chance to improve my cricket as well as meet and train with other cricketers.” Flintoff said.

Both players noted that their local cricket clubs played an important role in furthering their cricket.

Hale and Flintoff would like to thank their parents for supporting their cricket.

They would also like to thank the ACS as well as the BMECA and Cricket Victoria for their assistance.

On Friday, June 12, the ACS is holding its 47th Annual Dinner featuring Patron and former Australian captain Ricky Ponting and the formal introduction of Hale and Flintoff.