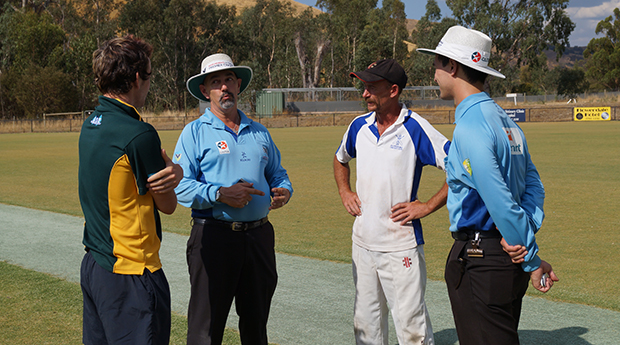 Strathewen Cricket Cub took home the Black Stump Trophy for the second year running after beating Marysville in the final of the tournament between fire-affected communities.

Supported by the State Government through Cricket Victoria’s Harmony in Cricket projects, this year’s competition was played in front of 150 people at Kinglake Memorial Reserve.

Kinglake Cricket Club President Jason Gaffee noted that the event began with the idea to donate money to emergency service volunteers who continue to look after local communities.

“As cricketers we get together each year to promote men’s mental health and also
give back to the CFA, who were instrumental in protecting the lives and properties of the people who take part in the game,” Gaffee said.

“The CFA don’t just fight fires, they perform many services and are integral to our communities.

“After the fires, people needed something familiar to get back to, and cricket played an important role.

“The day raised $600, which was divided between the Kinglake CFA and Kinglake West CFA.”

The event has changed since the inaugural match in 2010, with the format switching from Twenty20 to Super8s, to accommodate all teams to compete on a single ground on the same day.

The event also alternates venue each year, allowing each club to host.

The match itself is played in a light-hearted spirit and small fines are issued liberally to players, to help raise money.

Infringements include the result of the toss, dropped catches and bowling extras.

Gaffee added that the event encourages junior participation and activities beyond the boundary that include the whole family.

“This year, we had face painting for the kids, market stalls, a raffle and also a DJ, which added to the great atmosphere,” Gaffee said.

Gaffee said he would like to thank the Strathewen CC, Flowerdale CC, Marysville CC and Kinglake CC, Bendigo Bank and Cricket Victoria for their support.