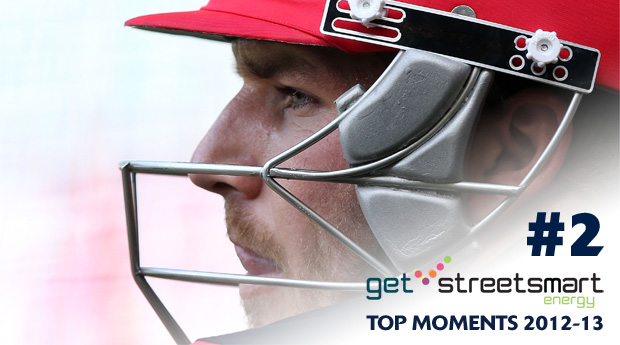 Aaron Finch was named Most Valuable Player in the second season of the KFC T20 Big Bash League after an explosive campaign with the Melbourne Renegades.

Streetsmart Energy is the best deal-maker for everyday Australians to save on their energy prices. There is no paperwork, no hassle and the service is free. For more information, please visit streetsmartenergy.com.au.

Aaron Finch was named Most Valuable Player in the second season of the KFC T20 Big Bash League after an explosive campaign with the Melbourne Renegades.

He produced arguably the finest innings of the tournament in the opening match when he struck an unbeaten 111, from just 65 deliveries, against the Melbourne Stars.

He followed that performance by top scoring against Sydney Thunder with 31 (33), hitting an unbeaten 46 (40) against Hobart and leading the Renegades’ run scoring for the fourth consecutive time with 33 (34) against Brisbane.

He missed out with 8 (8) in the Renegades’ loss to Perth, made 13 (14) against Adelaide before another Man of the Match performance against the Stars with an unbeaten 67 (47).

He posted a run-a-ball 23 in the semi-final against Brisbane to finish with the fourth-highest runs in the competition, behind Shaun Marsh (412), Luke Pomersbach (397) and Brad Hodge (342).

“Finchy’s had had an outstanding season [and] done really well at the top of the order,” Helmot said.

“He’s really set the tone for most of our batting efforts and his leadership and captaincy over the season has been fantastic.

“He’s certainly a well-deserved winner of this award.”

As well as his exploits with the bat, Finch’s innovative captaincy was a highlight of the tournament, impressing Helmot.

“He communicates well with his players and people follow him. That’s an important part of being a leader,” he said,

“He has a great understanding of the game, is a good, clear decision-maker and I think he’s quite a positive captain.”