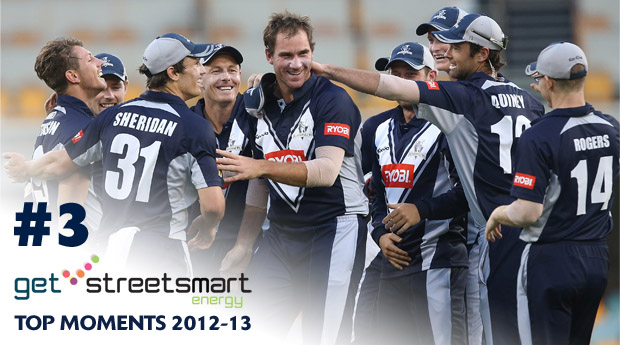 A heartbreaking loss in the Final was the lowpoint of a memorable RYOBI One-Day Cup campaign for the Commonwealth Bank Bushrangers.

Streetsmart Energy is the best deal-maker for everyday Australians to save on their energy prices. There is no paperwork, no hassle and the service is free. For more information, please visit streetsmartenergy.com.au

The series that ended with the side falling just two runs short of the title began at the WACA in September.

A welcome return from John Hastings, after a season out with injury, saw the Warriors restricted to 9-248 with the big paceman collecting 4-59 from 13 overs.

An ability for the Bushrangers batsman cost the side the match with four players posting scores between 31 and 40 as Victoria fell 25 runs short.

A record-breaking victory against the Bulls at the Gabba in October got the Bushrangers’ season motoring.

Victoria compiled a record total of 2-379 before dismissing the home side for 189 in the 39th over in one of their most emphatic ever limited-overs victories.

Stand-in skipper Aaron Finch led from the front, posting 154 from just 141 balls – the highest ever score by a Victorian – including 14 boundaries and a whopping five sixes, while his opening stand of 226 with Rob Quiney, who clubbed 119 from 111 balls, was also a new mark.

That batting form was taken into the side’s first home match when they amassed 5-348 – a record score for one-day matches at the MCG.

After another century partnership from Finch and Quiney, David Hussey put the icing on the cake with a hundred from 78 deliveries.

Tasmania threatened in the chase before Darren Pattinson iced the match with 4-46.

It was three wins on the trot after Victoria easily accounted for the Warriors in early November.

Hostile quick Jayde Herrick got the job done with the ball collecting a five-wicket haul before Finch and Glenn Maxwell hit unbeaten half-centuries to secure a bonus point victory for the side.

Another landmark performance followed against New South Wales at North Sydney when the Bushrangers chased down 351 with over three overs remaining.

Finch and Hussey both cracked 140 in the record chase.

The team’s momentum was halted going into the break for the KFC T20 Big Bash League when they went down to South Australia by four wickets.

Notable performances from Scott Boland (5-63) and Peter Handscomb (65) showed the depth in the squad.

The team returned from the ten-week break with another memorable victory, this time against the Redbacks in Adelaide.

A spell of 3-47 from Fawad Ahmed helped rein in the Redbacks total of 255 before Hussey (87) and Hastings (69*) chased down the runs in a thrilling finish.

A disappointing loss to the Bulls rounded out the home and away series with a welcome return to form from Michael Hill (88) and Chris Rogers (60).

Victoria was awarded a home final against Queensland and got on top early before a late Jason Floros assault got the Bulls to a total of 9-146.

The Bushrangers chase had more ups and downs than a rollercoaster but the loss of 3 wickets for 2 runs at the death would see Victoria consigned to runners-up.