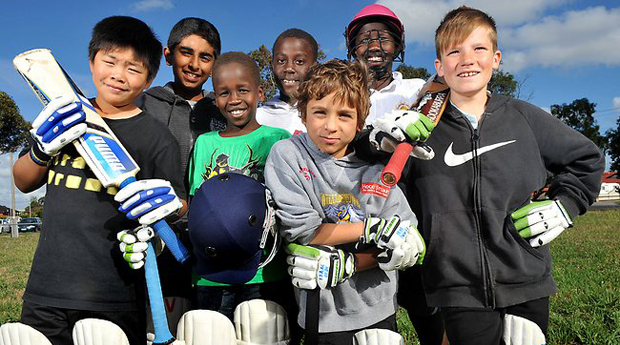 Sunshine Heights Cricket Club is celebrating after picking up the top honour at the Victorian Government Community Sport and Recreation Awards this week.

At a glittering ceremony at the MCG, Minister for Sport and Recreation, the Hon. Hugh Delahunty, MP, presented the club with the Minister’s Award and praised them for being an outstanding example of the power of community sport to bring people together.

Sunshine Heights coach Matthew Shawcross said it was a pleasant surprise and capped off a fantastic evening.

“I think it is a great award for the club to win and is in recognition of all the hard work everyone has put in,” Shawcross said.

“About 50 per cent of the kids come from non traditional cricket backgrounds. They have vulnerable home lives, and many vulnerable starts to life with many being refugees.

“With any organisation if you fill it with people who have got great values and combine those values together you can do amazing things.”

Located in the heart of Melbourne’s western suburbs, Sunshine Heights has been providing cricket participation opportunities for 58 years.

The ”We Don’t Like Cricket, we Love it” program, run in conjunction with Harmony in Cricket, has given refugees from Sudan, Uganda, Nepal, Eritrea and many others the opportunity to play cricket alongside children from different cultural backgrounds.

“There have been so many people involved,” Mr Shawcross said.

“The support we’ve received from Cricket Victoria and Annie Hateley has made this all possible. We can’t thank them enough.

“Mary Chool has also been fantastic. She is a South Sudanese lady who is making her own way in Australia.

“She has been translating for the other children and driving them about. She in herself is a role model to the others and shows them what can be achieved in their adopted country.”

Presenting the award to Sunshine Heights, Mr Delahunty said the club should be applauded for breaking down the barriers to get local people from all walks of life involved in cricket.

“The flow-on effects have also been compelling, with older community members acting as volunteers to support younger participants with transport, coaching and mentoring,” Mr Delahunty said.

“This is a shining example of the role that sport plays in increasing wellbeing not only for individuals, but for entire communities.”