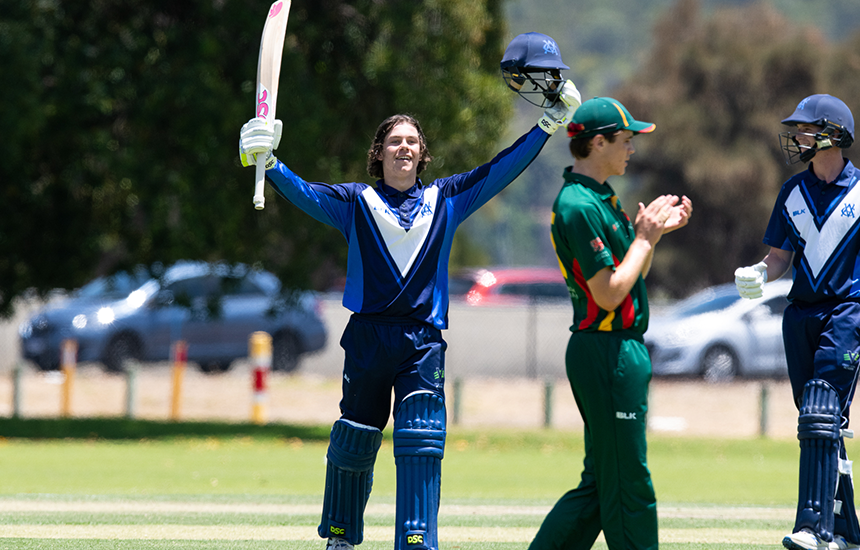 Both Vic Country and Vic Metro have continued their impressive results at the Under 19 Male National Championships.

Vic Metro are the only undefeated side after five rounds, sitting on top of Pool B. Vic Country sit second in Pool A, with three wins.

Vic Metro recorded a strong win over Northern Territory in Round 3, as the bowlers again did the damage.

Another three-wicket haul from Will Lovell and two wickets to Will Parker restricted NT to 173, a total which Metro chased down with minimal fuss thanks to Jake Fraser-McGurk (43) and Dylan Brasher (42).

A standout performance from Victorian Bailey Moon for the CA XI was the undoing of Vic Country in the same round. The Monash Tiger had a day out, snaring 7-22 to help his side limit Vic Country to 181.

Tom Jackson hit a half century for Vic Country, but the CA XI were able to time their chase perfectly to complete a six-wicket win.

Round 4 saw Vic Metro claim a slender 18-run win over South Australia, thanks to a very even bowling performance.

Fraser-McGurk was again in the runs for Metro, top scoring with 65 off 44 deliveries in a total of 9-200 in a shortened innings of 30 overs.

South Australia were in the game for a long time with the bat, but two wickets each to Lovell, Dylan Tibballs, Bailen Clarke and Angus Price helped Metro restrict the opposition to 182.

Vic Country’s total of 7-167 wasn’t enough against Queensland, as the northerners won by one wicket in the final over.

Round 5 saw both teams in the winner’s circle, as Vic Country defeated NSW Metro and Vic Metro overcame Tasmania.

Vic Country made their way to 184 on the back of 48 from Jackson at the top of the order, which proved enough as NSW Metro were skittled for 163 in reply.

A mammoth batting performance from Vic Metro saw them secure their fifth win of the competition. Openers Zac Sleeman (110 off 81 deliveries) and Dylan Brasher (109* off 129 deliveries) both hit centuries as Metro racked up 6-322.
A century to Tasmanian Mitchell Owen almost got his side over the line, but they fell 17 runs short in a gallant run chase.

Vic Country take on Tasmania and Vic Metro will face the CA XI in their next matches, starting today.