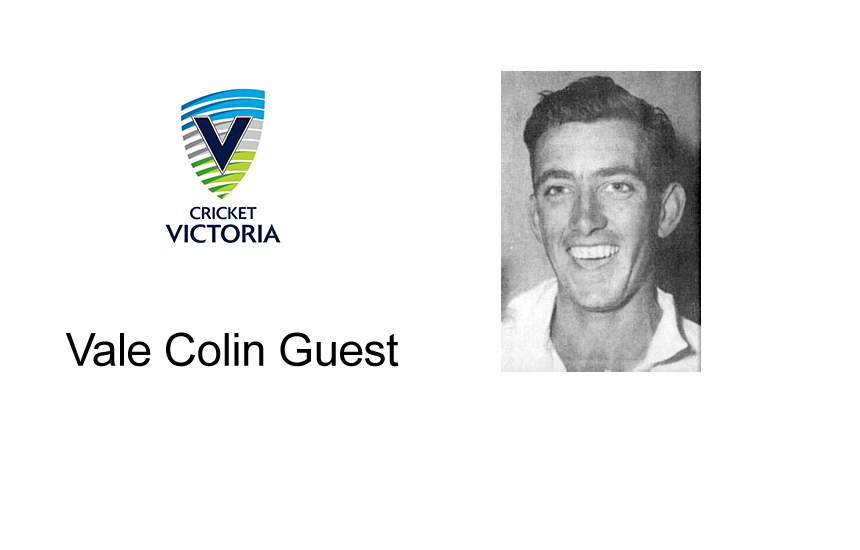 The following is an excerpt from “For Club and Country” by Ken Williams:

Colin Guest was born in Melbourne on 7 October 1937. Tall (six feet three inches) and broad-shouldered, he was an effective opening bowler with a vigorous run-up and pronounced side-on delivery. Generally bowling a fullish length, he could gain late out-swing when the ball was new and cut the ball from the off when it was old. He was an above-average lower order batsman with a sound defence who could drive powerfully and an excellent outfielder with a powerful arm, as befitted an interstate baseballer.

His sole Test appearance was in the Third Test against England at Sydney in 1962-63 when, after Australia had lost the previous Test, he was brought into the team to provide extra pace support for Alan Davidson and Graham McKenzie. He did not take a wicket – in England’s first innings his bowling was somewhat wayward, and in the second innings, when England was dismissed for 104, he bowled only two overs. However he took part in a last wicket partnership of 39 with another debutant, Barry Shepherd, which took Australia to a useful first innings lead.

Guest played 27 matches for Victoria between 1958-59 and 1963-64, capturing 95 wickets at 24.38, and scoring 571 runs at 15.86. He took five wickets in an innings five times, with best figures of seven for 95 (10 for 134 in the match) against WA in Melbourne in 1962-63. His highest score for Victoria was a hard-hit 60 against Queensland in 1961-62. He had a meteoric rise to first class cricket in 1958-59, gaining Shield selection in his first season of senior club cricket. He created a fine impression, taking 21 wickets in his first five matches, but a broken leg during the winter saw him lose his place in the Shield team, and he did not regain it until 1961-62. His outstanding season was 1962-63, when he topped the national bowling averages with 47 wickets at 22.62, assisting Victoria to win the Sheffield Shield for the first time since 1950-51. He lost his place in the Victorian team after a sudden loss of form in 1963-64 (perhaps due to the introduction of the front foot no-ball rule), when he took just three wickets in five games. After moving to Perth for work reasons in 1965, he appeared in seven Shield matches for Western Australia in 1966-67, when, with the Test players away in South Africa, he showed good all round form with 328 runs (including his highest first class score of 74 against Victoria) and 16 wickets.