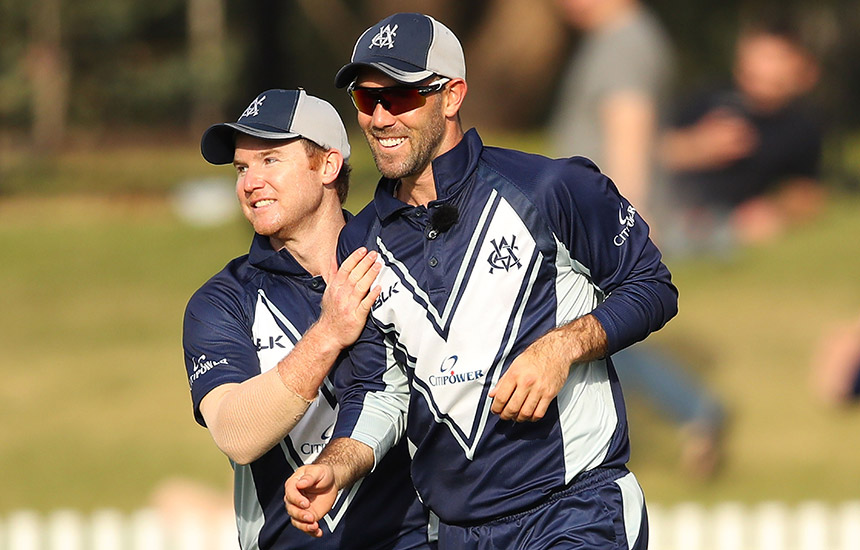 Victoria have stormed into Wednesday's JLT Cup final after stunning defending champions Western Australia, handing them just their second loss from their past 13 one-day games.

Chasing 333 to win, the Warriors were cruising at 1-121 but lost four key wickets in a little more than 10 overs – including a match-turning run out of skipper Ashton Turner – to hand the Vics the ascendency.

Skipper Peter Handscomb, opener Marcus Harris and left-hander Nic Maddinson had played crucial roles with the bat after the Vics won the toss, but it was their tail-enders who shone brightest as the last four wickets added more than 100 crucial runs to push the total well beyond the 300-mark.

The previously unbeaten Warriors had looked on course for victory when Josh Phillippe (28 from 14 balls), Josh Inglis (63) and in-form left-hander D’Arcy Short (44) were motoring along at better than 6.5 runs an over.

The circuit-breaker for Victoria came via a Jackson Coleman slower ball that Short tamely gloved down the leg side before Turner was caught short by a brilliant turn and throw from Glenn Maxwell, who chased and gathered a misfield and fired in a bullet return for wicketkeeper Handscomb to do the rest.

And when top-scorer Inglis was caught at point in the very next over, the momentum was firmly in Victoria’s favour.

Marcus Stoinis briefly looked threatening until he pulled a Chris Tremain delivery straight to the fielder at deep mid-wicket before Coleman, Fawad Ahmed and Andrew Fekete brilliantly dried up the runs and the required rate sky-rocketed to beyond 12 runs an over.

WA’s innings slowed to a crawl in the late overs as part-timer Maddinson was the surprise destroyer with four wickets, the Vics winning by 63 runs to set up a showdown against Tasmania in the tournament decider at Junction Oval on Wednesday.

A bright spot on a disappointing day for WA was the performance of pace ace Nathan Coulter-Nile, who produced late swing and noticeable bounce to take two wickets in his first seven balls at the start of the match. The injury-plagued right-armer, who on Friday earned a recall to Australia’s T20 side, returned in the middle overs to bounce out Maxwell for just seven and he finished with 3-50 from his 10 overs.

Victoria’s innings of 332 was bookmarked by two brief and unexpected surges in the run rate.

The first came from the blade of Harris, who ignored the loss of two early wickets to blaze a 49-ball innings of 73, with 64 of those runs coming in boundaries. With the score at 2-10, the dashing left-hander hit wicket-taker Coulter-Nile for five fours in an over on his way to a half-century from just 28 deliveries before he departed aiming another big shot at leg-spinner Usman Qadir.

Handscomb continued his good recent form with 80 from 73 balls, his fourth consecutive half-century, but his dismissal and that of Maddinson for 58 left the Vics in trouble at 6-228 with 14 overs still remaining.

But Matt Short (36 from 43 balls) and Tremain (25 from 22) lifted them towards a decent total before an unlikely last-wicket partnership of 40 between batting bunnies Ahmed and Fekete gave the hosts the momentum heading into the innings break. Ahmed’s innings of 16 featured two huge sixes, the first of his one-day career, as the Vics were bowled out with one ball remaining.

And the importance of that unexpected boost from Victoria’s tail was only amplified as WA’s required rate ballooned late in their run chase.