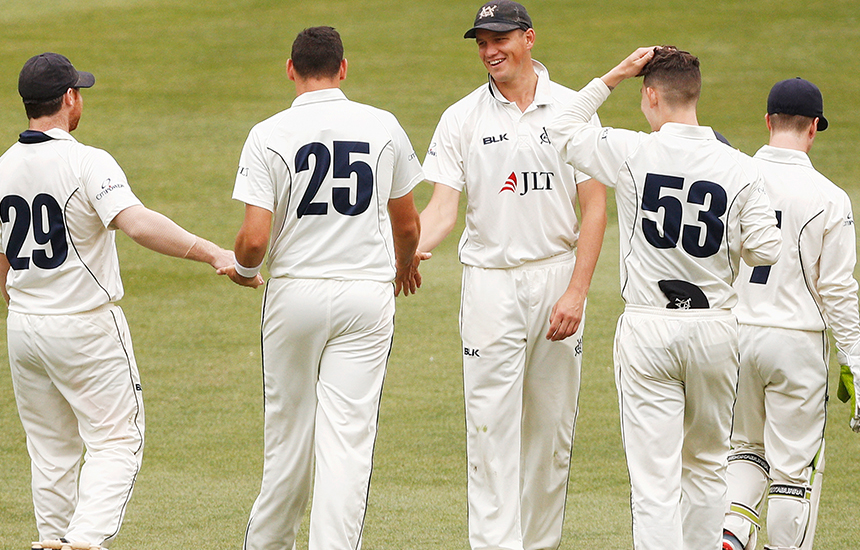 Victoria holds top spot with three wins on the back of strong seasons from Scott Boland, Chris Tremain and Marcus Harris.

With the first-half of the JLT Sheffield Shield season complete, Victoria are sitting on top of the table after recording strong wins against the Western Warriors, the New South Wales Blues and the Tasmanian Tigers.

New South Wales are a close second after securing two wins and three draws, with Queensland over coming some early season struggles to enter the break with two wins and two draws in third.

THE STORY SO FAR

Australian Test debutant Marcus Harris was picked to open the batting against India for the first Test after a strong showing in the early part of the season. Harris averaged an incredible 71.57 with a high-score of 250 not out in an innings that included 22 fours and one six.

Aaron Finch has retained his position at the top of the order for Australia following a solid series against Pakistan where he made 181 runs at an average of 45.25. In his only JLT Sheffield Shield game for the year, Finch made a strong fifty in the second innings batting at three in Victoria’s loss to Queensland.

Peter Handscomb also earned a Test recall after accumulating 361 runs at 45.12 for the Vics in the early part of the season. The unorthodox right-hander put up some big numbers, making 123 against South Australia before following it up with twin half-centuries against Queensland.

With limited opportunities, Glen Maxwell has managed 126 runs at an average of 42.00 across four innings for Victoria. The newly appointed Melbourne Stars captain will want to put some big numbers on the board to earn a spot in the Test side, heading into the 2019 Ashes series.

The top run scorers for Victoria this season are:

Scott Boland has been a standout performer bowler in the JLT Sheffield Shield in a breakout season for the big quick. Boland has taken 36 wickets at an impressive average of 17.41, some eight wickets ahead of Victorian teammate Chris Tremain.

Tremain, having a strong start to the season himself has taken 28 wickets at an average of 23.60 and was included in Australia’s squad for the first test against India alongside Peter Siddle.

Victoria’s potent pace attack has been rounded out by the return of quick James Pattinson from a lengthy stint on the sidelines due to injury. Pattinson has taken a tidy 9 wickets at 33.11 and is already bowling 140km/h thunderbolts as he continues his return to top pace.

Jon Holland also saw a return to form after being out of the side through injury. The left-arm spinner took 5/65 against Western Australia in the last game before the break.

The top wicket takers for Victoria this season are:

Will Pucovski returns: Young gun Pucovski returned for Victoria last week following a break from cricket to treat a mental health-related illness. Pucovski led the Vics to a huge win over Western Australia in the season opener, making a classy 243 before returning to make 67 in the last round before the break.

Nic Maddinson’s debut and injury: Welcoming Nic Maddinson in the off-season proved to be a masterstroke for Victoria, as he exploded for 162 runs in his first innings for the Vics. Maddinson was unfortunately struck on the arm in the second innings by young Western Australia speedster Jhye Richardson and suffered a broken arm. His injury is also a blow for the Melbourne Stars as the left-hander will now miss part of the BBL season.

Short and Gotch driving Victoria home v Tasmania: Young pair Matt Short and Seb Gotch combined for an unbeaten 131 run stand to get Victoria over the top of Tasmania in the fourth round of the JLT Sheffield Shield season. They came together at 4-145 chasing 276, after Victoria had lost in-form opener Marcus Harris (67) and Cameron White (41) in consecutive overs. The win gave Victoria its third win from four matches this season.