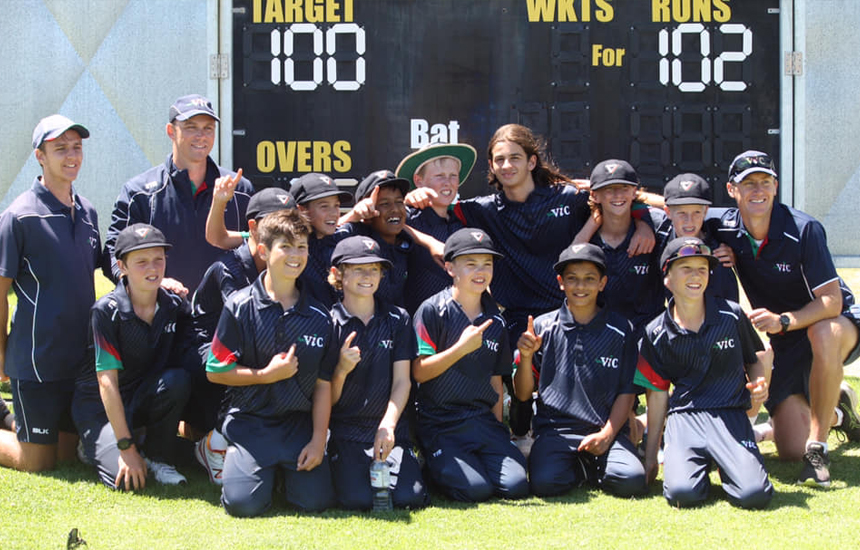 Victoria were too good for ACT in the Grand Final of the U12 Boys School Sports Australia Championship, winning by 10 wickets. Oliver Peake and Archie Flynn eased Victoria to victory with two impressive performances with the bat.

ACT batted first and made a respectable 99 runs from 46.3 overs with a strong innings of 35 not out from Jake Smith.

Jamie Matheson and Connor Weidemann were the pick of the bowlers with two wickets a piece.

The Victorian openers then set about picking the ACT attack apart, completing the run chase in just 26 overs. Peake made 50 runs from 87 balls, with Flynn not far behind on 41 runs from 70 balls.

Victoria were by far the strongest team in the competition, beginning the championship with a 43-run victory over Queensland, before rolling through Western Australia (2) and getting over the line in a close game against the ACT in round three, winning by two wickets.

In their last match before the final, Victoria defeated Western Australia (1) by four wickets on Monday at Egan Park Sporting Complex and Showground.

Young guns Aanlin Cheeran and Braydon O’Connor have been stand-out performers for Victoria throughout the tournament.

It was a successful tournament for Victoria with the girls winning their final game against South Australia to claim the bronze medal.

We look forward to formally congratulating both teams in a presentation before play on day three of the Boxing Day Test.