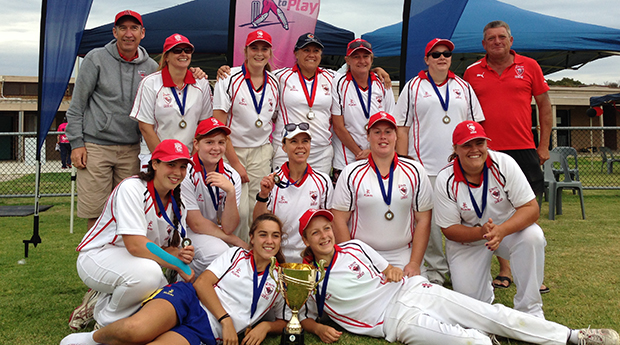 After winning the toss and electing to bat in the North West Final, steady partnerships from the Darebin Falcons set up their total of 3-203.

Rebecca Hicmott played a key role in consolidating and building an innings for the Falcons, finishing with 48.

However, it was skipper Julia Boyle who stole the show smashing seven sixes on her way to 91.

Boyle was dismissed on 91 off the last ball of the Darebin innings.

In reply, Gisborne was composed early with some tight bowling from Darebin and some excellent fielding,highlighted by a superb diving catch on the boundary by Faele O’Connor to dismiss the dangerous Sarah Gunn.

Gisborne’s Erin Kennedy provided an entertaining finish to the match with some superb striking to remain unbeaten on 60 at the completion of the Dragons allotted overs which ended on 7-124.

Boyle was awarded Player of the Final for her 91 and three wickets.

In the Central Final, Coburg won the toss and elected to bat against top of the ladder Frankston.

Cath Morrow provided the only resistance to the strong Frankston bowling group, finishing with an unbeaten 66 taking Coburg to 6-92 from their 40 overs.

In reply, Frankston passed the Coburg total in the 31st over for the loss of five wickets.

Aimee Mellford was awarded Player of the Final for her 35-run knock and two wickets.

While in the South East Final, Bayswater Park won the toss and sent Mt Martha in to bat.

Mt Martha compiled 7-175 from their 40 overs with Fiona Hale top-scoring on 72 with other vital contributions from Julie Fearns (31) and Bethany Richardt (20).

In return, Bayswater Park was bowled out for 98 thanks to an excellent team bowling performance from Mt Martha.

Fiona Hale was awarded the Player of the Final for her match winning knock.