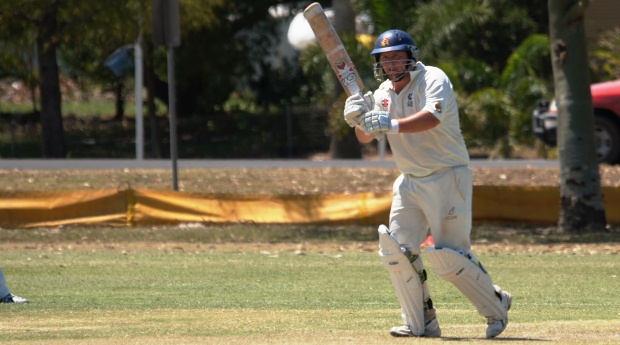 Mornington Peninsula's Bob Wilson has become the first Victorian batsman to stroke a double century at the Australian Country Cricket Championships after producing a devastating innings against South Australia in Bundaberg yesterday.

Eclipsing Ben Walter’s Victorian record of 169 from five seasons ago, the Mooroduc stalwart was at his imperious best against the Outbacks, hammering 26 boundaries and five sixes during his 236-ball stay in the middle that spanned five hours and 17 minutes and reaped 201 not out.

Skipper Heath Pyke chipped in with 53 and Traralgon’s Adrian Burgiel continued his fine carnival with 40 from just 38 balls as Victoria posted 7-376 from its 96 overs.

As a result, the Outbacks will need to score at close to four an over throughout their innings to chase down the mammoth target.

“It was a really smart innings, he went through some tough times particularly when he was getting tired, and there was definitely some peaks and troughs.

“But he played some wonderful cricket shots, he wasn’t slogging, and it was magnificent to watch.”

Mornington Peninsula’s Rob Hearn (19) and Geelong’s Eamonn Vines (24) navigated the new ball, the former departing in the 18th over, before Wilson took control.

A watchful Vines stroked two boundaries and a six before he too fell, allowing Wilson and Pike to put on 142 for the third wicket.

Wilson became just the third player at the carnival to stroke a double century, with NSW’s Mark Littlewood (223*) and Glenn Grimmond (204) the only two batsmen to sit above him.