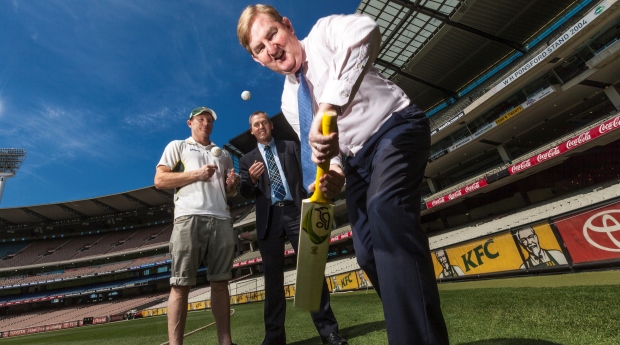 The Acting Premier of Victoria, the Hon. Peter Ryan, MLA, was on hand at the MCG today to officially launch the Regional Victoria Living Expo T20 Cup.

For a seventh season, the state-wide competition pits the top-16 clubs from across Victoria – eight metropolitan and eight country – in a knockout format before the Final is held on the hallowed turf of the MCG on February 21, 2014.

“Cricket Victoria’s T20 Cup is a great opportunity to promote the Regional Victoria Living Expo because it involves teams from regional Victoria and metropolitan Melbourne competing to play in the final on the hallowed MCG turf on 21 February,” Mr Ryan said.

“This is the third Regional Victoria Living Expo, a key initiative of the Coalition Government’s strategy to drive population and investment into regional and rural Victoria.

“In February, we’ll give one lucky Victorian club attending this year’s expo a training session with the Victorian Bushrangers at the MCG.”

“The Expo demonstrates the range of opportunities in regional and rural Victoria in one visit, and gives the State’s 48 regional and rural councils a chance to promote the benefits of their area to attract residents, workers, business and investment,” Mr Ryan said.

The 2014 event will be the third year of the Expo and will run from April 11 to 13 at the Melbourne Convention and Exhibition Centre.