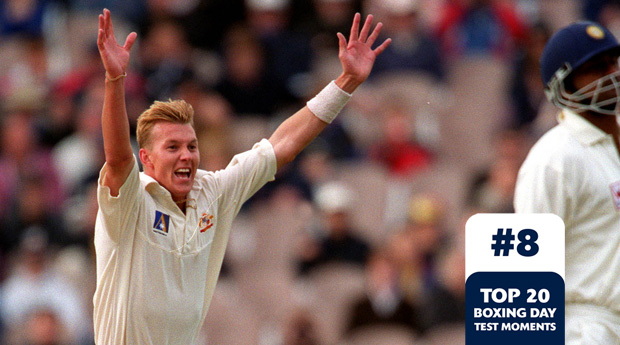 Brett Lee burst onto the international scene with a five-wicket haul in his Australian debut in the 1999 Boxing Day Test.

Brett Lee burst onto the international scene with a five-wicket haul in his Australian debut in the 1999 Boxing Day Test.

The speedster knocked over opener Sadagoppan Ramesh with just his fourth ball then removed “The Wall” Rahul Dravid shortly after.

Bowling regularly over 150km/h, Lee tore through the Indian lower order, taking three wickets in an over to complete a memorable haul.

After Australia had batted across seven rain-affected sessions in compiling 405 in their first dig, with Michael Slater top-scoring with 91 and Lee contributing with 27, India finally made it to the crease just before lunch on day three, in front of a crowd of 23,127.

Lee’s five-wicket haul restricted the Indians to 238 before the Australians set up about setting a total, promoting Adam Gilchrist (55) to number four in the batting order.

Half-centuries to Gilchrist and Mark Waugh helped the home side to 5-208 before Steve Waugh declared.

Chasing 376 for victory in the second innings, Tendulkar, who was named man-of-the-match, again top-scored with a half-century (52) with Lee (2-31) picking up Dravid for the second time in the match as Australia went on to record a 180-run victory.

Lee finished with match figures of 7-78, the best by a debutant in Boxing Day Tests.