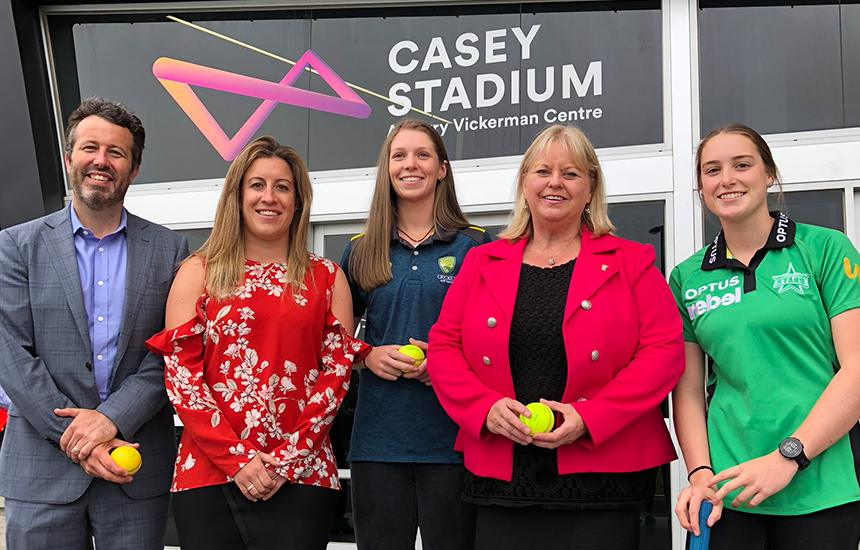 Over 1000 players and officials will take part in the championships from 29 June to 13 July 2019, which sees national titles up for grabs in four open divisions, five junior divisions, plus the Lord’s Taverners Shield for players with an intellectual disability.

The first stage of the $18 million major redevelopment at Casey Stadium opened in 2017, with stage two set to be completed and opened in early 2019.

The stage two expansion will deliver five indoor cricket courts including a standalone show court as well as cricket training lanes. A dedicated gymnastics hall and five redeveloped netball/basketball courts are also included in this stage of development. This project makes the centre one of the largest in the state and the second indoor cricket facility capable of hosting national competitions in Victoria, alongside Junction Oval, importantly providing cricket participation opportunities all year around for the Casey community.

Over 180,000 people play indoor cricket across the country, with the fast, fun and social format providing opportunities to play all year around.

“The National Championships showcase the best of those players, including several State & BBL/WBBL representatives, highlighting the importance the format is to players cricketing journey.

“Cricket Australia is proud to partner with the City of Casey to host next year’s championships estimated to generate a $2.5million direct economic impact for the Casey region.”

“National Championships are always a special occasion, but in 2019 these will be extra special as we are hosting in a new, world-class facility,” said Rohan.

“As well as an indoor cricket venue, the facility will double as a training facility for some of Victoria’s best cricketers and a dedicated community facility to inspire and grow the game in Melbourne’s south-east.”

“The City of Casey, along with our Casey Stadium partners YMCA, are delighted to welcome cricketers from across Australia to our new, purpose-built indoor cricket facility,” said Cr Stapledon.

“Already one of Victoria’s most prominent and state-of-the-art indoor sport facilities, the expansion of the Casey Stadium to include a dedicated gymnastics hall, five indoor cricket pitches and five redeveloped netball/basketball courts, makes the centre one of the largest in Victoria.

“The City of Casey is committed to providing premier facilities for our local community to participate in active recreation and are excited by the opportunities this facility will deliver for our residents to get involved in indoor cricket, gymnastics, accessible programs and watch national sports stars in action close to home.”

“The YMCA is thrilled to be partnering with the City of Casey and Cricket Australia to deliver a national event in Casey,” said Barry.

“The Casey Stadium redevelopment project sees the new expanded facility showcased to an Australia wide audience. We look forward to welcoming all cricketers at Casey Stadium and ensuring they have a great experience in our Centre and in Casey.”

Players competing at the tournament will also have the chance to be selected to play for Australia at the 2019 Trans-Tasman Series in Christchurch, New Zealand from 6-8th September 2019.