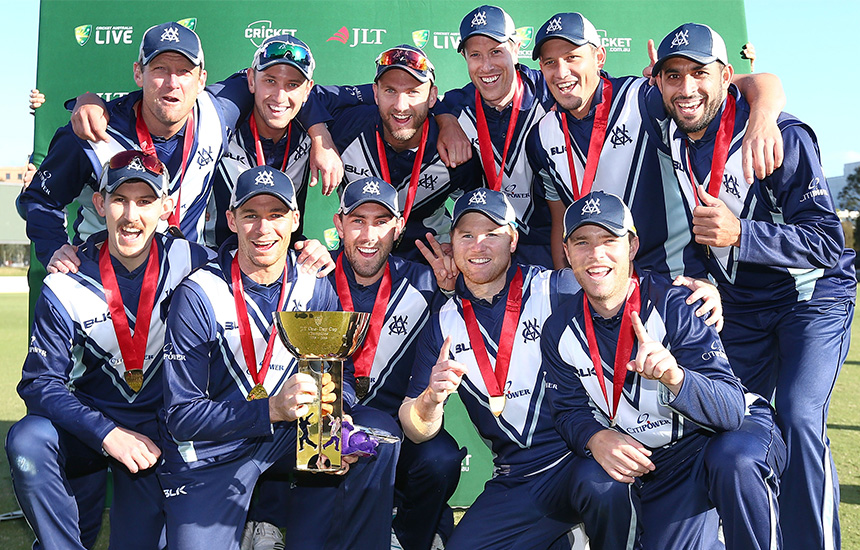 Victoria have claimed the 2018 JLT Cup title after defeating Tasmania by 110 runs at the CitiPower Centre on Wednesday.

Sandhu’s 7-56, which included three wickets from the final three deliveries of the innings, held Victoria to 274 despite White’s 88, but the Tigers were bowled out for 164 in 40.4 overs as Victoria romped to a 110-run win at Junction Oval.

Victoria’s triumph capped off a fast finish to the tournament for Peter Handcomb’s team, who won two of five group matches and advanced through their washed-out qualifying final against New South Wales thanks to a superior Net Run Rate (NRR) by a margin of just 0.02, before an upset win over reigning champions Western Australia saw them through to the decider.

Tasmanian cricket, meanwhile, has been handed its third final defeat of the year having already lost the Big Bash and Sheffield Shield finals last season.

Victoria elected to bat first on a sunny but cool Melbourne morning and openers White and Marcus Harris carried the locals to 0-88 before Simon Milenko brought about the much-needed first wicket, grasping a return catch to remove Harris for 45.

Dismissed for a duck on Sunday on his return from a groin complaint, White was looking ominous as he passed fifty, striking four booming sixes as he made Tasmania pay for two missed catches.

But there was to be no hat-trick of lives for White, with Matthew Wade safely pouching a third skied chance to end the Victorian opener’s entertaining 96-ball knock on 88.

Glenn Maxwell, elevated to No.4, departed for nine, with Nic Maddinson bowled for a five-ball duck shortly afterwards.

It was left to Handscomb to push along the Victorian total, the in-form skipper reaching the boundary three times and clearing it once before departing one run shy of a fifth consecutive half-century.

A late flurry from Matt Short (37 off 34) added crucial runs late in Victoria’s innings, but it was Sandhu with the emphatic final statement as he claimed four final-over wickets.

He had Chris Tremain caught on the boundary with his second delivery, before Short became the first wicket of his hat-trick, holing out to Alex Doolan in the deep.

Fawad Ahmed was bowled for a golden duck and the hat-trick – the first by a Tasmanian player in the domestic one-day competition – was completed when George Bailey caught No.11 Andrew Fekete.

The Tigers might well have been pleased to restrict Victoria to a total under 300, but regular wickets meant their chase never fully launched.

Maxwell made up for his failure with the bat in the sixth over when he had Wade (15 off 21) edging behind.

Player of the tournament Ben McDermott (34 off 43) made a sedate start, taking 35 balls before finding his first boundary. But just when he started to look threatening – he clubbed 20 runs in the space of just seven deliveries – his efforts to ramp up the run rate brought him undone when he took on leg-spinner Fawad only to sky a catch to Maddinson.

Maddinson was back in the thick of the action again three overs later when he trapped Jordan Silk lbw for four with his first delivery, leaving the Tigers teetering at 3-72, and the situation became more dire when Bailey (11) edged behind to give Fekete his first.

Tasmania were eventually dismissed for 164 after some late theatrics from spirited No.10 Jackson Bird (26 from 21) briefly staved off Victoria’s winning moment.