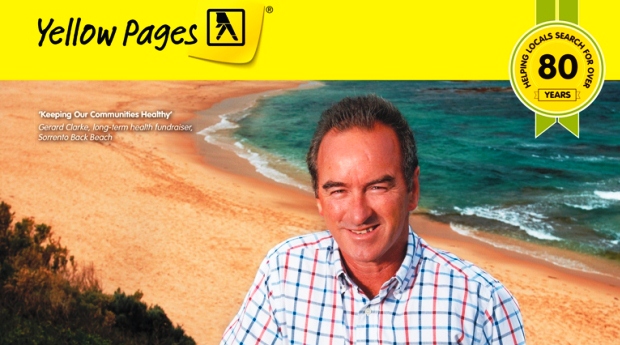 Former Commonwealth Bank Bushranger Gerard Clarke has been selected to appear on the cover of this year's Mornington Peninsula White Pages and Yellow Pages book.

Clarke was selected for the cover under the 2013-14 theme Keeping Our Communities Healthy, which recognises selfless Australians who go above and beyond to improve the quality of life for others in their area.

In 1997, when two of Clarke’s godchildren were diagnosed with spinal muscular atrophy, the 46-year-old, who played three first-class fixtures for Victoria in 1994-95, decided to do all he could to help.

Using his cricketing contacts, Clarke organised a benefit for the children, raising more than $75,000 to assist with treatment costs.

Since then, Clarke has been helping numerous locals battling serious illness.

Over the past 16 years, he has raised more than $180,000 to help individuals fighting various forms of illness pay for medical rehabilitation and transport costs.

In 2011, Clarke became a founding member of the Britney All-Smiles Foundation, which supports children with special needs.

Since the organisation’s inception, Clarke has assisted the group’s fundraising efforts and raised more than $40,000 for a proposed sensory garden at a local special school and other initiatives to assist special needs children.

“Never in a million years would I have guessed I would be on the cover of a phone book, but I thank Sensis for selecting me,” Clarke said.

“I hope my selection encourages everyone in the region to continue supporting the great work of the Britney All-Smiles Foundation.”

Each year, Sensis®, the publisher of the White Pages® and Yellow Pages®, recognises the efforts of local people in their communities by celebrating their achievements on the cover of its books.