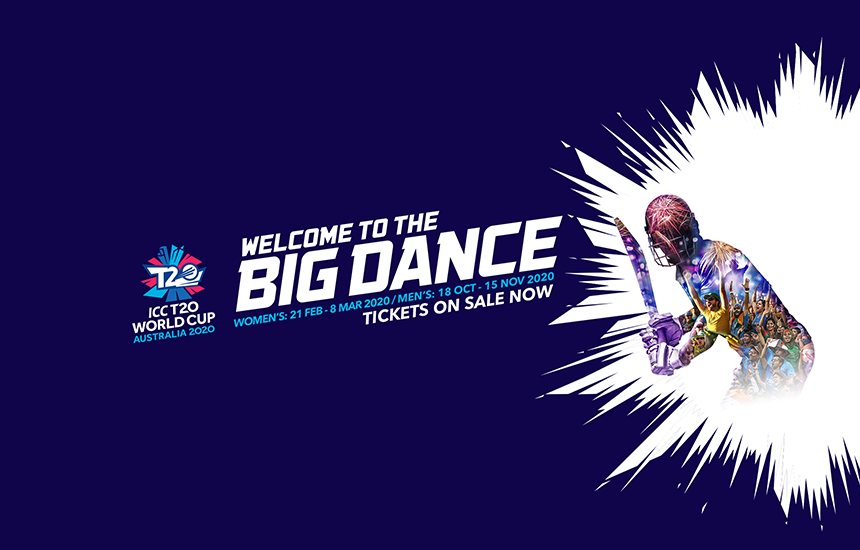 Tickets to the ICC Men’s T20 World Cup next year have today gone on sale to the general public, meaning fans can now secure their seats at any match, with exactly one year to go until the first ball is bowled on October 18 next year.

To mark the occasion, the event campaign ‘Welcome to the Big Dance’ has been launched, celebrating all the competing countries coming together for two World Cups in 2020.

All tickets for both the women’s and men’s tournaments are now on sale at t20worldcup.com meaning fans can be part of any of the 68 T20 World Cup matches around the country. The focus is firmly on families and communities with children’s tickets starting at $5 and adult tickets available from $20 across both tournaments.

More than one million fans are expected to attend and the ‘Big Dance’ captures the movement, energy and excitement that each country and culture will bring to both tournaments next year.
The standalone women’s event will take place first, from 21 February – 8 March 2020, followed by the men’s event later in the year.

The T20 World Cup forms part of a ground-breaking 12 months for cricket in Australia, starting today with the beginning of the first standalone WBBL that will lead into the ICC Women’s T20 World Cup, starting on February 21.

It’s the first time that Australia will host T20 cricket’s global showpiece and matches will be played in eight host cities and 13 venues around the country.

Bangladesh and Thailand recently claimed the last two places in the ICC Women’s T20 World Cup, while the last stage of qualification for the ICC Men’s T20 World Cup begins today with 14 teams competing in the Global Qualifier in the UAE for the six remaining places at Australia 2020.

Junction Oval is set to host a five-match festival of cricket featuring five of the world’s best women’s teams, culminating in the final at the MCG on International Women’s Day. The men’s tournament will take place later in the year with the opening day featuring 2014 Champions Sri Lanka in First Round action at Kardinia Park, Geelong on 18 October 2020, as they begin their campaign to progress to the Super 12 stage. First Round matches will take place at Kardinia Park across three match days, with each comprising a double header, for a total of six matches.

The opening match at the MCG will feature New Zealand and defending champions the West Indies going head-to-head under lights on Sunday 25 October. India will be on show twice under lights in Melbourne, firstly on Thursday 29 October, then in a huge match against England on Sunday 1 November. In a blockbuster Friday on November 6, hosts Australia will take on Trans-Tasman rivals New Zealand under lights. Earlier that day, the world’s number one-ranked side Pakistan will be on show as part of the MCG’s only double header.