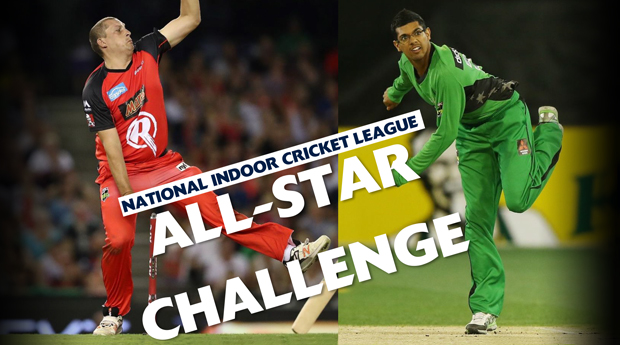 The best of Victorian Indoor Cricket took to the courts in the inaugural NICL All-Star Challenge over the Queen's Birthday long-weekend.

In the opening match of the evening, the Clive Rose led Stars went head to head with Trent Lawford’s Renegades. Batting first the Stars put together an imposing target of 106, with Frankston’s Cameron Dinger (21 runs) and Cranbourne’s David Dervan (19 runs) influential at the bookends of the innings for the Stars.

In reply, the Renegades were overpowered by the Stars bowling depth scrambling to a total of 68. Brendan Rose took 3 wickets for the Stars, while Lawford top scored with 21 runs for the Renegades.

The final match of the All-Star Challenge saw the two winners, the Victorian Open Men’s against the Stars. Batting first the Stars struggled against some tight bowling, managing a total of just 36. Croydon’s Andrew Keane led the way with the bat registering 15 runs.

In reply, an even batting performance saw Victoria scrape across the line with a total of 45. Clive Rose (7 runs, 2 wickets) and Kieran Perkins (6 runs, 3 wickets) were key contributors for the state team.

This weekend NICL returns to Victoria with all Women’s and Victoria West Men’s matches at Northcote, while the Victoria East Men’s zone will travel to ICON Arena in Doveton.