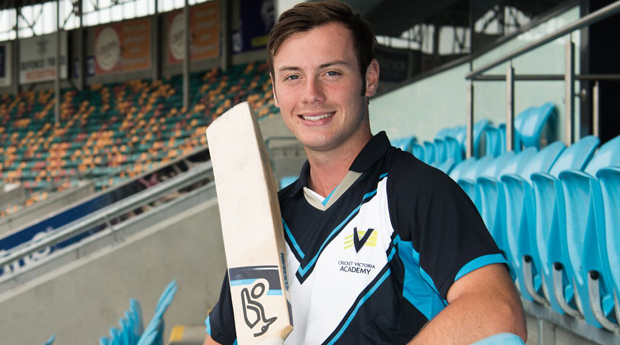 Young guns Will Sutherland, Zak Evans and Jonathan Merlo have been named in Australia's 15-player U19 World Cup Squad.

The prized young prospect chose cricket over a promising AFL career in July and his decision is paying dividends, representing Victoria in three one day matches in the JLT Cup already this summer. This included an imposing 4/11 against New South Wales in just his second game.

He is no stranger to the international stage either, representing Cricket Australia XI against Pakistan last summer.

Sutherland was also recently signed as a rookie by the Melbourne Renegades ahead of the upcoming KFC BBL season.

All-rounder Jonathan Merlo made his own List-A debut for the Cricket Australia XI in September and played four matches this summer. He amassed an unbeaten century against Sri Lanka’s U19 side in the first match of their one-day series in April.

Speedster Zak Evans – signed as a Bushranges rookie in the JLT Cup – has also shown his prowess on the international stage, claiming two four-wicket-hauls against Sri Lanka.

Like Sutherland, Evans is a talented footballer who would have been eligible to be drafted next year.

National Selector and former Test star Greg Chappell is bullish about the chances of Australia holding the cup aloft.

“I think this is a very exciting squad and there is some exceptional talent within this group,” Chappell said.

“We’ve got a good spread of skills through the squad. We’re quite strong with our pace bowling, we have good depth with our spin bowling, and a number of our top-order batsmen all offer viable bowling options, which gives us a lot of flexibility when it comes to team selection.

“These guys have all had success at underage level in Australia over a number of years, and many of them have already had a taste of international under 19 cricket. We’re fortunate that a lot of these players have already played together coming through the underage pathway, which is a great thing.

“We believe this squad has a serious chance of contending for the title at the end of the tournament.”

The ICC Under 19 Cricket World Cup begins on 13 January, with the final to be played on February 3rd.

Australia has been drawn in Pool B, and begins its World Cup tilt against India on the  14th January at Tauranga’s Bay Oval, before facing Zimbabwe (17th) and Papua New Guinea (19th) at Lincoln Green in Christchurch.

The squad will head into camp in Brisbane in early January, before playing practice matches against Sri Lanka on the 9th of January and South Africa on the 11th of January at the Hagley Park complex in Christchurch.