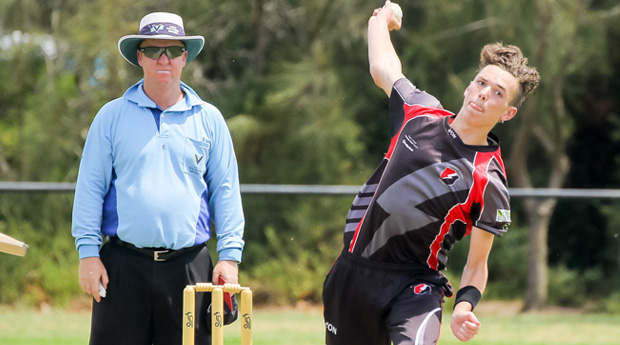 Cricket Victoria Umpiring Manager Richard Patterson and Head of Cricket Southern Bayside Warren Griffin have put the call out for more men and women in the middle officiating in the competition next season.

Cricket Southern Bayside (CSB) had around 30 umpires on the competition’s roster in season 1 with the hope of an even bigger pool of people next summer who want to get involved for their love of high quality cricket and a summer challenge.

Experienced umpire Cliff DeSouza said it had been a positive experience.

“Many teams and umpires have done their best to create a fun and spirited environment . In this atmosphere, cricket is the winner which is why it’s been great to be a part of,” De Souza said.

For umpire Connor Gordon – who officiated in the opening season of CSB – the umpiring experience was a positive one.

“Umpiring is great for people who love the game and enjoy a challenge. It’s a lot of fun getting to witness a high standard of play from the best spot on the ground, whilst also being an active part of the game,” Gordon said.

For fellow umpire Adrian Connolly, the community spirit on display in the new competition was reflected on field in the way players and officials interacted.

“As it was new for all the players, it was exceptionally good seeing captains, players and clubs working together with the opposition and umpires to ensure the spirit of the game was foremost in their behaviour. Games were played competitively at all times but in the spirit that they should be,” Connolly said.

Griffin said additional umpires would allow CSB to capitalise on the terrific momentum the new competition has. Club, player and umpire feedback has been very positive.

“Having umpires in all games is crucial to the success of the competition and we’d like to see more people, men and women, getting involved in this vital part of the game. As a competition we are working with the umpiring group to develop off field programs that build a great social environment, continues development and acts as a pathway to higher honours for umpires,” Griffin said.

For former player-turned-umpire Shane Currie, donning the blue shirt provided a different appreciation of the game.

“I’ve always enjoyed being involved in a game of cricket, generally as a player but when it was obvious that I would be unable to play at a level I could be satisfied with, I decided to give umpiring a go. As an umpire I found myself centrally involved in games. I was also fortunate enough to umpire at a considerably higher level than I was able to achieve as a player which allowed me appreciate the skills, tactics and competitiveness of,” Currie said.

It is a similar experience for Warren Duncan: “I umpire to be a part of cricket again after playing many years ago and to be able to experience the comraderie of the clubs and players and officials, and to see the brilliance of some players up close makes the effort very worthwhile.”

Want to get involved? Visit our Umpires page