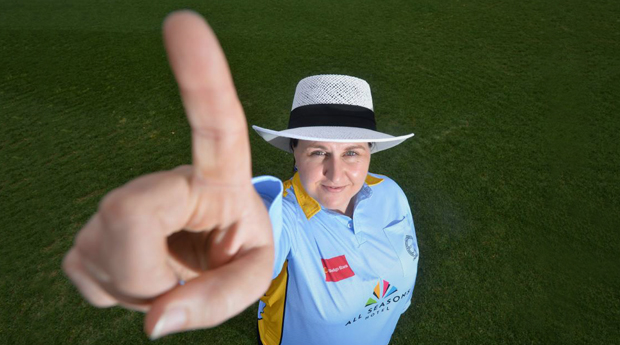 With more females picking up the bat and ball each year across Victoria, many are also taking part from a different angle.

Helen Wardlaw is in love with cricket. A former Test cricketer for England, Wardlaw took up umpiring 12 months ago after spending over 20 years as a player.

“I love cricket, in any shape or form. I would watch it at any level 24-7 if I could, and umpiring gives me the opportunity to watch the game from the best seat in the house.”

In January 2017, Wardlaw made history alongside Lisa McCabe when the pair became the first two female umpires to officiate a game in Bendigo’s 83-year-old Country Week cricket carnival.

For Wardlaw, however, it’s about more than just making history – it’s about staying involved in the game she loves any way she can.

“Having played cricket for more than 20 years, I still wanted to be involved in the game I love watching,” said Wardlaw.

“It gives me the opportunity to utilise my knowledge of the game in making accurate decisions confidently and consistently. I’m looking forward to getting more games up my sleeve next season and a Level 2 umpiring qualification.”

Like Wardlaw, McCabe’s love of cricket also steered her towards umpiring – as well as limited playing abilities which McCabe acknowledges openly.

“I wasn’t ever very good at playing so umpiring gives me the chance to still be a part of the game,” McCabe said.

“If you love the game but haven’t got the ability to play well, it’s a great way to stay involved and get out and about over the summer months.”

Others, like Wardlaw and McCabe, are also helping to defy the gender stereotypes of Australia’s favourite sports.

AFL umpire Eleni Glouftsis recently become the first female AFL field umpire to take control of a match, following the footsteps of Chelsea Roffey who debuted behind the goals as a goal umpire in 2004.

In cricket, women of all ages across Victoria are officiating at all levels.

Rebecca Gravestock is a mother of three, and umpires to support her children’s involvement in the game as well as break the stereotypes from when she was growing up.

“I noticed at my children’s club that there seemed to be an assumption that only men could umpire and help at training,” said Gravestock.

“If any of the women got involved it was for scoring and only occasionally. I really wanted to show people that Mums can umpire too and have the chance to get involved.

Better still, Gravestock is a local pioneer in her community and an inspiration for other young girls that they too can be involved in cricket in more ways than just playing.

“I’m really pleased that I can show my sons and daughter that women can umpire in cricket too,” Gravestock explained.

“Having access to the community umpiring accreditation has also given me that extra confidence to put my hand up.

“I’d recommend to any girls or women out there who love cricket to get involved.”

It’s this kind of promotion and a generational “changing of the guard” that has likely led to younger girls, like Zoe Quinsey, to donning the umpire’s broad brimmed hat too.

At just 17 years of age, Zoe took to umpiring as a way to develop her knowledge and love of the game, as well as give back to the club that has supported her as a young female player.

“I got involved in umpiring because I wanted to broaden my involvement and understanding of the game, and contribute to my club in multiple ways,” said Zoe.

“I was a player before I started umpiring and still am… It’s been a great opportunity to develop my umpiring skills and knowledge of the game as well.”

It’s clear the landscape of sport is changing for the better, with far more women being recognised appropriately for their contribution to sport across the state.

Whether playing, officiating or supporting from the sidelines, cricket provides more women with the opportunity to participate at all levels, and is a key factor in the growth seen in Victoria over the years.

Women like Wardlaw, McCabe, Gravestock, and now younger girls like Zoe, have set the foundations for greater female involvement in the years to come, and again proves that cricket is a sport for all Victorians.