Regional Big Bash Final to be played tomorrow at the MCG 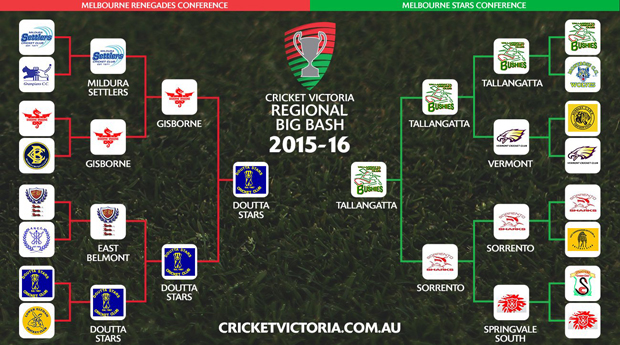 The Tallangatta and Doutta Stars Cricket Clubs will face off in the Cricket Victoria Regional Big Bash Final at the MCG tomorrow.

Doutta Stars, who play in the Victorian Turf Cricket Association, have been in good touch throughout the competition and already have some experience on the big stage after finishing as runners-up in the 2013-14 final to Baden Powell CC.

The Stars defeated Lower Eltham, East Belmont and Gisborne in their three matches to book a place on the MCG.

Lorenzo Ingram has been the standout performer for Doutta, hitting 161 runs in the three games including 80 against Gisborne in their conference final.

Coming from the Cricket Albury Wodonga competition, Tallangatta have also been in red-hot form throughout the tournament, with three relatively comfortable wins against Montrose, Vermont and Sorrento on their way to the final.

Brett Allan has been in good touch, having taken five wickets throughout the tournament including a performance of 3-22 in his side’s conference final victory over Sorrento.

Allan has also proved more than handy with the bat, with 102 runs from his two innings during the competition.

Play is due to get underway at the MCG at 10am – the match will be live scored on MyCricket here: http://mycricket.cricket.com.au/common/pages/public/rv/match.aspx?locx=MATCH&matchID=2253675