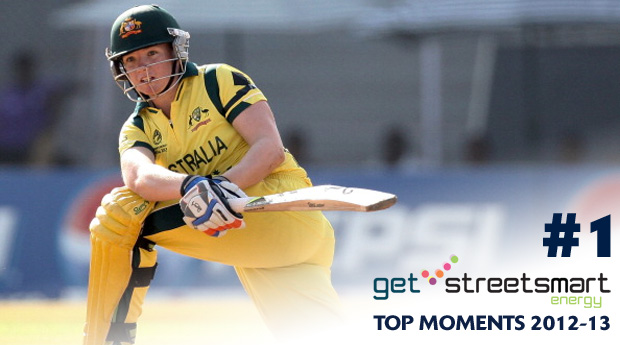 Commonwealth Bank VicSpirit superstar Jess Cameron achieved a record during the 2012-13 season no player has ever reached before.

Streetsmart Energy is the best deal-maker for everyday Australians to save on their energy prices. There is no paperwork, no hassle and the service is free. For more information, please visit streetsmartenergy.com.au.

Commonwealth Bank VicSpirit superstar Jess Cameron achieved a record during the 2012-13 season no player has ever reached before.

She became the first player, male or female, to record Player of the Final performances in both one-day and Twenty20 World Cups.

Cameron also did it in successive tournaments after she inspired Australia to an underdog victory against England in the World Twenty20 in September then top-scored again in the Southern Stars’ triumph over West Indies in the one-day tournament.

In the World Twenty20 Final, she struck 45 from just 34 balls- finishing the tournament with the highest strike rate, most sixes and second most runs- to defeat the previously unbeaten English by four runs during a thrilling conclusion in Colombo.

Carving out her own slice of history, the 23-year-old was at her brutal best during the 114-run one-day Final victory in India, hammering the spin-dominated West Indies attack with eight boundaries and two sixes.

“I knew with the batting style that I have it would come off,” Cameron said.

“I didn’t feel any pressure and I think that help me.