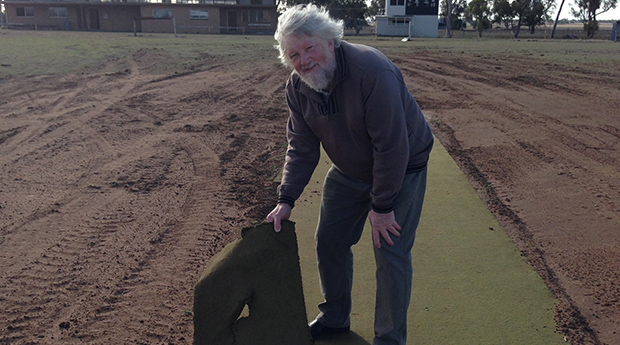 At the age of 69 and a resume that includes an extensive playing career with Rosebud, Gembrook, Moorabbin and Tasmania as well as several years umpiring in the Wimmera Mallee Cricket Association, Barry Johnson could be forgiven for wanting to hang up his cricket commitments.

Instead, Barry along with a legion of keen locals from the town and neighbouring district of Watchem have resurrected the local cricket club and are now busily preparing the facilities that were once home to the ‘Panthers’.

With support from other clubs in the association, assistance from the Buloke Shire and Cricket Victoria the club will once again become the hub for the local community that was once a thriving town and not only supported a cricket team, but also football, tennis, bowls and a large school.

A busy local progress society has recently developed a community picnic lake area and with the cricketers returning to the town and plans to revitalise the clubrooms, Saturday afternoons in summer will once again ensure Watchem has a sporting centre for young and old alike.

Local clubs Marnoo and Hopetoun have already offered support via working bees planned over the next few months and the shire are financing the replacement of the well-worn synthetic on the remarkably sound concrete pad.

With additional financial support from the progress society, local farmers and townspeople, along with 14 cricketers signed up and ready to play in the official rebirth of the Watchem Panthers CC that will take place in September.

Ian Green the last captain of Watchem will be in attendance, along with a troupe of local cricketers returning to the game including Will Davidson and a trio of teenage boys who live in the town.

As Barry joked he would pull on the whites if required, one couldn’t help but notice the gleam in his eyes as he recounted his cricket past.

One thing is for sure cricket is alive and well in the Wimmera and the re-emergence of a club long considered history will provide a great deal of joy for locals and cricket lovers across the region.