Under 18 National Champs roll into 50 over matches 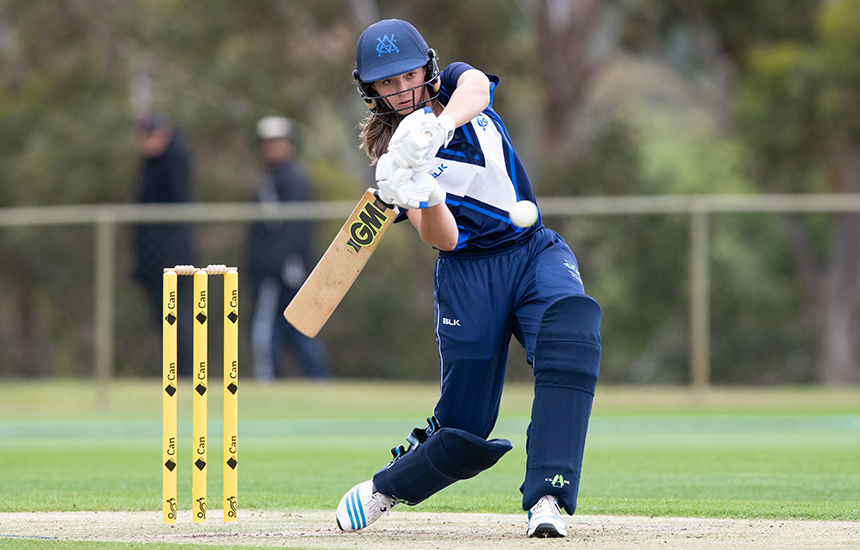 The Under 18 Female National Championships has moved into the one-day phase of the competition after six T20 rounds.

Victoria Country defeated Tasmania in their Round 5 match by 13 runs in a rain-affected contest.

Merinda Hale continued her impressive run with the bat, hitting an unbeaten 44 to guide her side to 5-99 from 14 overs.

Round 6 later in the day saw Metro take the field to secure a win over NSW Metro by 12 runs. Batting first, a half century to Lara Shannon and an unbeaten 40 from Ella Hayward helped the Vics to 4-118.

Katia Jomini was the star with the ball, claiming 3-16 from four overs to restrict the NSW side to 6-106.

Vic Country also had another win, this time over Western Australia.

Western Australia appeared on track in their run chase, but lost a flurry of late order wickets to fall short at 9-101 from 20 overs. Four run outs by Vic Country fielders aiding the cause.

The two Victorian teams squared off in the first of the 50-over games yesterday, with Metro taking bragging home rights.

Lucy Cripps top scored for with 58 and Tiana Atkinson was also among the runs with 48 at the top of the order. Tahlia Meier added 23 to help Country to 7-193.

Metro were never really troubled in their chase – Tess Flintoff led the way with 48, Ella Hayward scored 46 and Jessica Matin and Katia Jomini both scored 31 to help run the total down with three overs to spare.

All teams are enjoying a rest day on Saturday, before Vic Country takes on Tasmania and Vic Metro faces ACT/NSW Country on Sunday.

Full scorecards from all matches are available at nationalchamps.com.au.