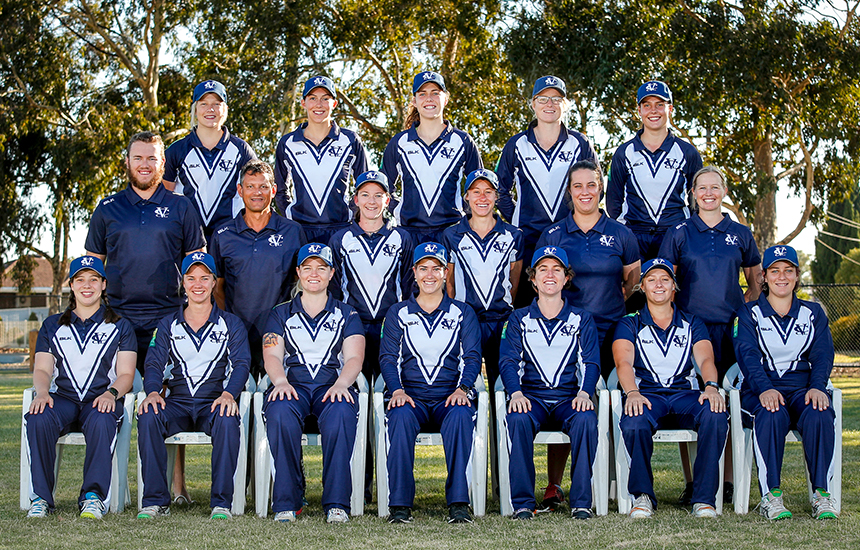 It was a hugely successful campaign for the Victorian Women’s team in the Toyota Australian National Country Cricket Championships, played in Shepperton last week. The men’s team also had a successful Championship, finishing runner up in the one-day format.

The women’s team stormed through the T20 tournament undefeated to win the final, before picking up a number of awards for outstanding individual performances.

It was back to smooth sailing with wins against New South Wales Country and Western Australia Country in rounds 6 and 8, before a rematch with New South Wales in the semi-final gave the Vics a scare.

Victoria batted first making 6/108 with handy contributions from Yates, Parker and Townsend before the bowlers held New South Wales Country to 8/106 led by Chelsea Moscript who took 2 for 9 from her four overs, securing a narrow victory.

Victoria posted 5/122 batting first against Queensland Country in the final played at Vibbert Reserve on Friday 11 January. Openers Yates and Moffitt set a great platform for the innings, making 34 and 49 respectively.

It proved to be too much for Queensland, finishing their innings on 4/113 after a great bowling effort from Victoria, with Moscript again the star taking an outstanding 3 for 6 in a high-scoring game.

Four Victorian’s earned a place in the Women’s Australian Country XI with Amy Yates voted Player of the Championship.

Yates was quick to promote the Championships and explain how it helps the development of women’s cricket,

“You’re bringing cricket players from around country and letting the girls show case their skills at a very high standard” she said.

Jansz also praised the tournament for the benefit it has on the community,

“Their commitment to this tournament was clearly evident and on behalf of all the players & coaches, I would like to extend a massive thank you to everyone connected with staging this event.”

The Victoria Country Men’s team also had a strong tournament, earning a place in the one-day final.

The men’s tournament is made up of four T20 and four one-day games. A winner is named for each format as well as an overall champion.

Victoria Country Men’s team struggled in the T20 format but excelled in the one-day competition winning three out of four games before going down to Western Australia in the final.

Western Australia batted first, making 188 from 44.2 overs, which proved too good for Victoria, who were all out for 119.

Congratulations to all those involved in the championships and Go Vics!