Victorians urged to get FireReady 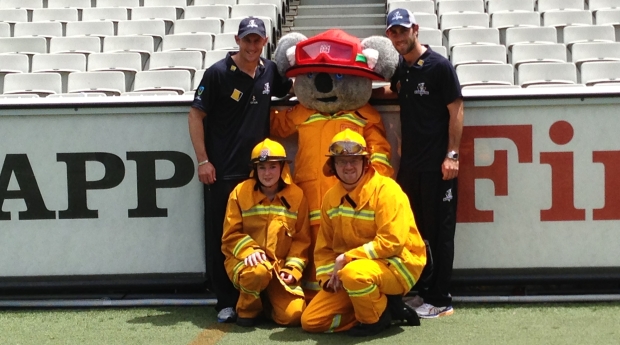 Cricket Victoria (CV) is proud to announce a new partnership with the State Government for the next 12 months.

The alignment with Australia’s favourite summer sport, which was formally declared earlier today, will encourage the community to plan and prepare for fire this summer as part of the Victorian Government’s annual Summer Fire Campaign.

As a result, the CFA will feature prominently at the Bush Bash this Saturday, which is Victorian Premier Cricket’s round of Twenty20 triple-headers, with a presence to be seen in Horsham, Bendigo, Wangaratta and Morwell.

The FireReady message will also feature prominently through perimeter advertising at the MCG this summer for all international fixtures including the iconic Boxing Day Test.

Minister for Sport and Recreation, the Hon. Hugh Delahunty, MP, said Cricket Victoria was an obvious fit to help promote the FireReady message.

“The Victorian Government welcomes this partnership with Cricket Victoria, which links fire safety with the great tradition of cricket, enjoyed by thousands of Victorians over summer,” Mr Delahunty said.

“This summer we are encouraging Victorians to talk to their families about what they will do on high risk fire days – and decide in advance when they will leave and where they will go.

“This partnership provides a valuable opportunity for CFA and MFB brigades to get information out on a local level and talk to their communities about fire risk.”

CV Chief Executive Officer Tony Dodemaide said this morning’s announcement, which came in the middle of Fire Action Week, was a reminder for Victorians to begin their preparations for the fire season.

“With a large proportion of our 1,176 clubs based in high-risk fire areas, the partnership between the Summer Fire campaign and Cricket Victoria is an obvious fit,” Mr Dodemaide said.

“The synergy between cricket clubs and the CFA is clear with both representing the heartbeat of regional communities.

“We want all Victorians to be FireReady this summer and our 270,000 cricketers to lead the way.”

Find out more on the Bush Bash round at http://cricvi.co/T3Xk20