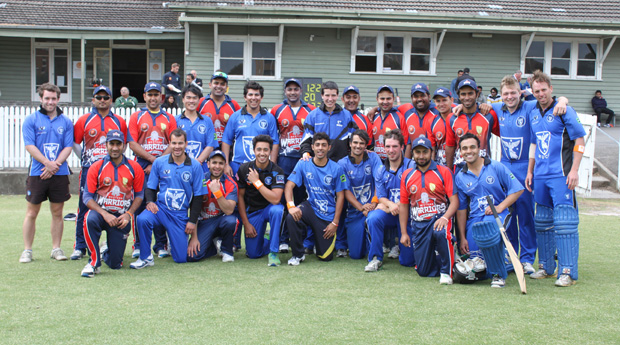 A Pakistan sporting legend was in attendance for the Harmony in Cricket Challenge Cup held at Melbourne University on Wednesday.

World Cup winning captain, and current national hockey coach, Akhtar Rasool, took time out of his busy schedule to watch the climax of an exciting match between Melbourne Uni and the Western Warriors.

He was joined by other coaching staff from the Pakistan team, who are currently playing in the Champions Trophy in Melbourne.

The game itself had all the usual thrills and spills of a T20 contest, with the home side coming through for a four-wicket win off the final ball of the match.

The fixture was arranged by Warriors captain Adnan Khawaja, who was looking for some testing match practice ahead of the squad’s trip to Queensland to take part in a Twenty20 competition on the Gold Coast.

Khawaja arrived in Melbourne in 1996 from Sialkot, Pakistan.

He began playing for Footscray-Edgewater Cricket Club, slowly rising through the ranks to play for the club’s first team.

In doing so he became one of a handful of Pakistan-born cricketers to play first-grade in Melbourne.

“The most important thing for us was to get some practice against some good sides before we traveled up to Queensland.

“The good thing about the side is we have a mix of different cultures and nationalities. We have players from Pakistan, India, Australia, New Zealand all playing together.

“We’ve managed to build a really good team and hopefully we can keep progressing.”

The two teams have forged a strong relationship over the last few seasons.

Current Uni fourth team player, Romi Bansal, who made 29 on the day, plays for the Warriors on a Sunday.

Ahmed couldn’t attend the game due to his commitments with the Melbourne Renegades, however he did arrive later to greet the team.

On the pitch Khawaja showed his class to smash a fine 45 before he was bowled by Kapoor.

Some late order hitting saw the Warriors close on 122.

Congratulating both teams on an excellent day’s cricket was State Member for Tarneit, Tim Pallas, who said the game encapsulated the spirit of the Harmony in Cricket program.

Mr Pallas was one of a number of influential figures who helped secure Ahmed’s asylum in Australia.

He knew his case well having played with him at Hoppers Crossing Cricket Club.

Rasool also stayed around to answer questions at the end.

Away from hockey he said cricket was a great passion of his.

He remembered Khawaja from his days in Pakistan having watched him play for the under-19s national side as a youngster.

A day later the coach would go on to inspire a magnificent performance against Olympic champions Germany in the quarter-finals of the Champions Trophy.

The 2-1 victory was celebrated by the Pakistan community in Australia and the millions watching it on TV back home.