Portable pitches on trial in Melbourne 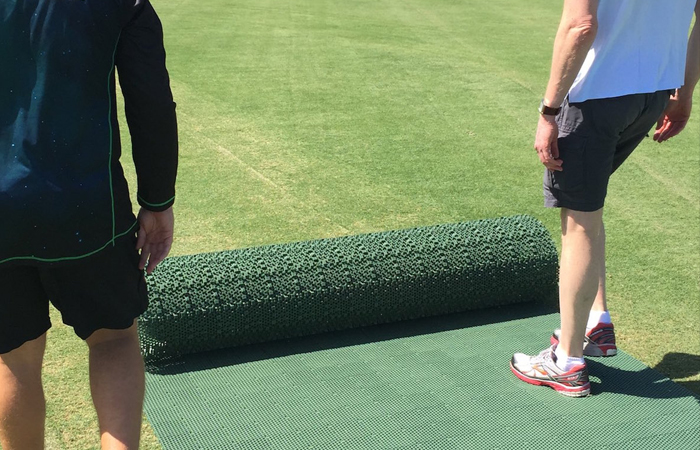 A pilot program that’s being jointly-funded in Melbourne by Cricket Australia, Cricket Victoria and the City of Stonnington Council could help to solve one of urban Australia’s most perplexing issues; the proper utilisation of junior sport’s dwindling recreational space in densely-populated inner-city areas.

The UK-based Flicx Pitch, a recycled plastic product designed to provide flexible use on the outfields of grounds, is being used in the trial.

Apart from their durability, their portability allows for two or more junior games to be played simultaneously on the one oval, a point Scott Tutton, Cricket Victoria’s Club and Competitions Manager, said could help to change the perception some local councils have about the sport.

“In the metropolitan areas of Melbourne, Sydney and Brisbane, there are councils that find themselves under severe pressure in terms of facility utilisation,” said Mr Tutton, while overseeing two matches that were played at the same time on the 1.63-hectare TH King Oval in the Melbourne suburb of Glen Iris.

“While we’re a traditional summer tenant, there are people who believe we could use the grounds even more.

“Portable pitches would allow for these grounds to not only be well used, but they could potentially also allow for junior cricket to be prioritised and allow for them to play on better quality grounds.”

The pitches, which consist of rows of small plastic tiles, are laid on hard, flat surfaces and need a minimum of only 30 minutes before a game starts to settle. Mr Tutton said if the trial proved to be successful, it was possible junior cricket matches could be played concurrently on prestige venues such as Junction Oval, which stages Sheffield Shield matches.

“We’ve found the harder and firmer the subsurface is, the better the performance,” he said.

“The pitches have minimal impact on the subsurface, which is fantastic. We’re thinking it would be beneficial to play junior games using these pitches on Premier Club venues such as Junction Oval and Toorak Park.”

Grant Smethurst, the Recreational Services Coordinator for the City of Stonnington, said the pitches could be the answer to the headaches being caused by limited access to sportsgrounds.

“It provides us with more of a chance to get kids to play cricket,” said Mr Smethurst.

“We don’t have many more grounds, but more kids want to play sport – and that means we need to find ways for more kids to use the grounds.”

The City of Stonnington has 22 sportsgrounds which service a total of 46 winter and summer sporting clubs.

Cricket competes against baseball and touch football for playing space, but Mr Smethurst said the portable pitches could be a literal game changer.

“If they’re happy to play [on portable pitches] after seeing that it works, we can provide access to more grounds,” he said.

“We can provide this as a solution. Now they have seen it in action – and they know that it works – it’ll be easier for us next season, and beyond, to say we can get four games going on a ground such as TH King Oval every Friday night.”

Another supporter of the portable pitches was injured Australian fast bowler James Pattinson who, after watching the two games that were played at Glen Iris, described them as “fantastic”.

“There’s a fair bit of bounce in them and they’re quite life-like underfoot,” he said.

“With the population building up in the cities – and there’s not much space – I can see why these would be great for kids.”