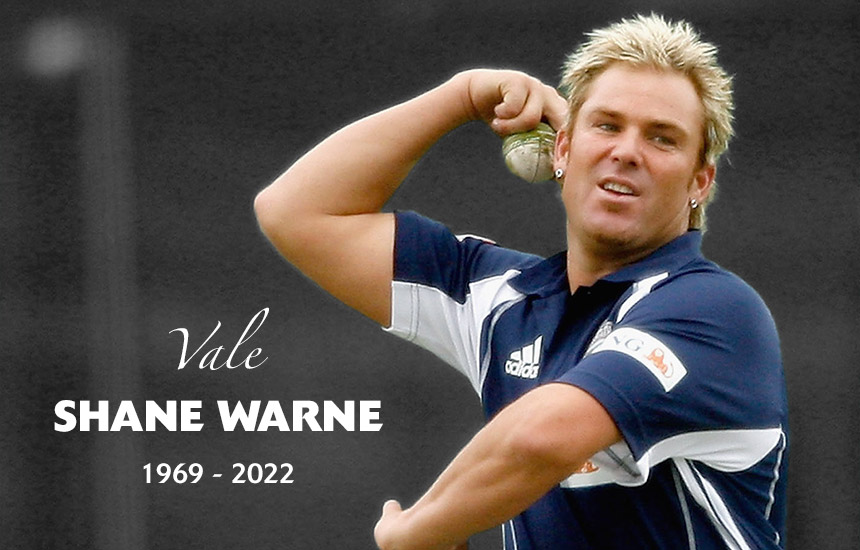 Cricket Victoria expresses its profound sadness following the death of legendary Australian and Victorian leg-spinner Shane Warne at the age of 52.

We also extend our sympathy and support to his many team mates, friends and colleagues across the Australian cricket family and in media, television and all who played a role in his storied playing career.

Warne joined St Kilda Cricket Club in the 1984-85 season and made his First Class debut for Victoria at Junction Oval against Western Australia in February 1991.

Warne would go on to take 708 Test wickets for Australia, bettered only by Sri Lankan legend Muttiah Muralitharan in the record books.

Australia’s finest cricketer since Sir Donald Bradman AC, Warne was loved, admired, and respected by so many, not just for his incredible contribution on the field, but for the excitement, inspiration and passion he brought to so many people’s experience with cricket.

Larger than life, Warne embodied cricket to a generation of Australians.

“It has been an exceptionally sad 24 hours for Australian cricket and the passing of Shane Warne – one of Victorian and Australian cricket’s favourite sons – is an enormous loss. His achievements are unforgettable because they were immense. He was game-changer on the field and brought a legion of fans to cricket globally.”

“He was the finest leg-spinner in the game’s history and inspired and mentored a generation of leg-spin bowlers working on their craft around the world. Beyond his playing career, Shane had a successful career in broadcasting, working around the world bringing cricket to life on television. He was magnetic for viewers and fans.”

“It is a tragedy that he was only 52. Our consolation is that we were lucky enough to witness a once in a generation talent come through the ranks at his beloved St Kilda Cricket Club, to playing for Victoria and his ultimate success at Test level.”

“We will take some time and consider the appropriate ways we can honour Shane’s contribution to cricket in Victoria.”

“It’s hard to put into words at the moment other than extraordinary sadness. Shane was a once in a lifetime player. As a Victorian, I couldn’t be prouder of the impact he had on the game. Despite his media and travel commitments, he would still drop into Junction Oval from time to time. He was global in every sense of the word but Melbourne was still home,” Graf said.

As a mark of respect, Victoria’s men’s squad will wear black armbands in their One-Day Cup match against Tasmania tomorrow at Blundstone Arena.

In addition, all players involved in Victorian Premier Cricket this weekend will wear black armbands.