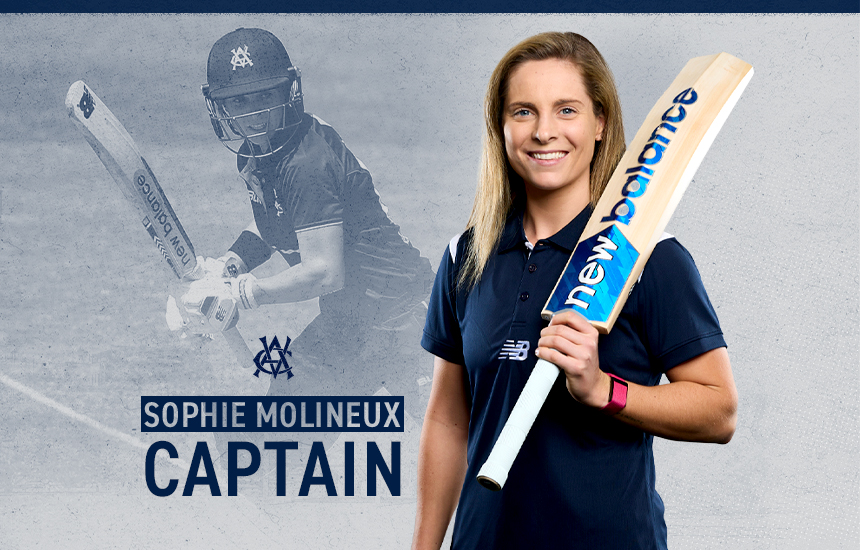 Cricket Victoria is pleased to announce Sophie Molineux as captain of Victoria.

Molineux is a two-time ICC T20 World Cup winner and captained the Melbourne Renegades to the WBBL finals in her first campaign as captain last year.

The move will see Meg Lanning take a step back in leadership within the Victorian squad.

Lanning was named captain of Victoria as a 22-year-old in 2014 and believes it is the right time to deliver new state captaincy opportunities.

“It’s been a huge honour to captain Victoria and I love representing my state. The Victorian squad has some fantastic young leaders and I’m excited to continue working with them in the seasons ahead,” Lanning said.

“Meg’s been an amazing Victorian captain for a long period of time and we’re excited about the future leadership potential in the squad,” McMahon said.

“We’re fortunate to have Meg’s leadership skills to support Sophie and the full squad in years to come.

“Sophie has done a fantastic job leading the Renegades and has long been seen as a leader within Victorian cricket. This is an excellent opportunity to further her leadership skills with our playing group.

“Nicole Faltum did a great job stepping into the role last season and will continue to play an important role supporting Sophie.”

Molineux said it was a great opportunity.

“Coming from country Victoria it’s a privilege to be named captain of the state. I’ve really enjoyed the challenge of captaining the Renegades and am looking forward to the years ahead with Victoria.

“Playing with and learning from Meg since I started at Victoria has been a great experience, she has an incredible understanding of the game, hopefully I’m able to take some of that into my own game.

“It’s an exciting time for Victorian cricket, we have a really talented young squad who have been working hard over the off-season. I’m especially looking forward to working closely with Nicole Faltum who did an excellent job leading the side last season.”

Victoria kicks off their WNCL season on September 23 in South Australia as part of an extended 12-game home and away season.