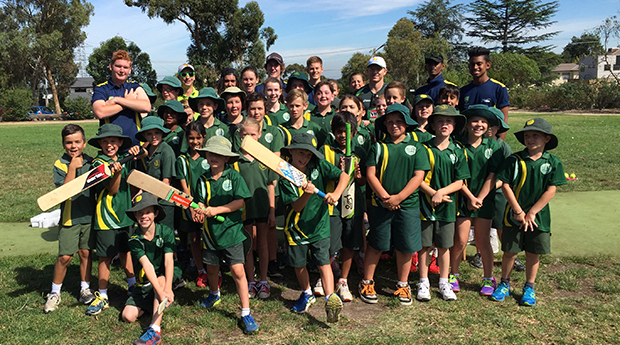 As the winners of Cricket Victoria’s Cricket Colours Day competition, students from Years 3 to 6 participated in a clinic followed by a Q&A session with Rogers and Hunter.

“It was great to get down to Pinewood who are a very good cricket school in the region and are very active in supporting carnivals and activations.

“The clinic went for around an hour where students rotated through different skill stations and Chris and Julie were actively involved in those.

“Lots of autographs were signed and at the end kids were asking all sorts of questions ranging from what’s your favourite food to wanting to know about their cricket journeys.

“I’d like to thank Chris, Julie, Pinewood for making it a great day as well as SEDA’s Springvale class for assisting.”

Cricket Victoria would also like to congratulate East Loddon P-12 College and St Mary’s Primary School Inglewood who each won a cricket kit valued at $400 after claiming second prize in the Cricket Colours Day competition.

To get into the spirit of the Cricket World Cup, Cricket Victoria encouraged students and teachers to host a Cricket Colours Day on February 13.

We would like to thank everyone that got involved on the day.